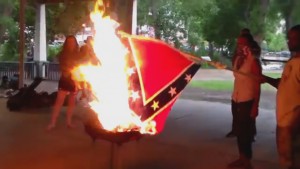 A woman named Patricia Cameron organized a rally in which the Battle Flag of Northern Virginia was burned in a charcoal grill. She’s been given a summons for fourth degree arson. Welcome to the United States of police intimidation.

In the aftermath of the Dylann Roof murders, Cameron went to a local park with a few friends, laid the flag on a pole in a barbecue pit, sprayed it with lighter fluid, lit it, and then another protester held onto it in the grill while it burned.

Here’s the crime she’s being charged with:

It’s clear to me that Cameron started a fire but it’s also completely obvious to me that there was no danger to the structure or any bystander. They were cautious and careful in their protest. It is an area where barbecues are often held although this particular pavilion was not a barbecue pavilion. I’m sure much more dangerous fires, and by that I mean fires that are hardly dangerous at all, take place in that park every weekend.

The police then conducted a two week investigation of the incident and showed up at her door at midnight to give her the summons. Really? Midnight?

This is simply a case of police officials using their power to intimidate and harass citizens and waste tax-payer money.

Here is a video of the entire incident.

Manitou Springs Police spokeswoman Odette Saglimbeni said, “We’re just looking at the safety of anyone around there, and city property as well. Those flames got pretty big pretty quick.”

Those flames got pretty big, pretty quick? Wow. I’ve seen bigger flames at a fish fry. I can only guess the police in Manitou Springs don’t have to worry about real crimes, either that or they’re a bunch of jerks.