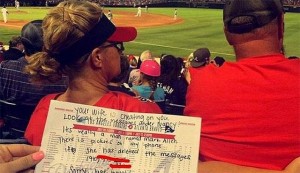 I just read a story about a pair of women who noted that the woman in front of them at an Atlanta Braves baseball game was sexting with a man all the while sitting with her husband. They took pictures of the texts, wrote a note to the man with their phone number, and sent him the incriminating photos when he replied.

It’s a story that is both of the modern age and one that is ages old. If you know someone is cheating on their spouse, or see some other perceived ethical failing, should you inform the presumed aggrieved party?

I may get a lot of heat for this but I think the women who wrote the note were in the wrong. It’s just not their business to inform the husband of the cheating.

One reason is there is some chance the couple has an open relationship wherein they have sex with others. It’s also possible that the man is having many affairs and the woman is having her revenge. It’s possible the man is abusive. Anything is possible but those aren’t really the reasons that I’m against exposing such things.

I’m just of the opinion that it’s not our business, even more so when the effected parties are complete strangers. People who meddle in the affairs of others claiming they are doing good generally cause far more harm than the ills the claim to be solving.

I know that people will ask me if I would want to know if my girlfriend or spouse was cheating on me. The answer is that I wouldn’t want someone else telling me. I wouldn’t be particularly grateful to the tattletale.

If I had witnessed the exchange I’m pretty sure I would have said nothing.

What would you have done?