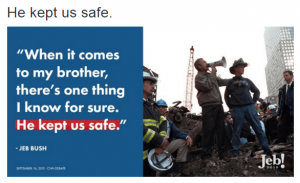 Presidential candidate Donald Trump stated the factual information that President George W. Bush was the sitting president when the September 11th attacks on the World Trade Center and other locations occurred. This has spawned hue and cry from Republican politicians including Bush’s brother, John Ellis (JEB) Bush who tweeted the image I’ve included in this post.

The gist of the argument is simple enough, He kept us safe.

The problems I have with this statement are many and deeply felt. I’ll start with a famous quote from Benjamin Franklin that I think well sums up my opinion.

Those who would give up essential Liberty, to purchase a little temporary Safety, deserve neither Liberty nor Safety.

My first shuddering reaction to that tweet is the simple fact that Jeb Bush apparently thinks the primary job of the President of the United States is to keep us safe. The idea sounds reasonable but it’s not. If your main job is to keep anything safe, the best way to do this is to take away that thing’s freedom. Keep it locked behind impenetrable walls and away from the dangers of the world. One, of course, should not be foolish and do dangerous things for no reason but safety and freedom are to a large degree antitheses of one another. That Jeb Bush thinks of this first in defending his brother is troublesome.

My next reaction is the simple fact that it cannot be established as an accurate assessment. There is no way to know if the lives lost in President Bush’s administration were equal to, less than, or more than would have been lost under another leader. Were lives lost? Certainly. Many soldiers died and many more were horribly maimed in wars that, if anything, made us less safe, emboldened our enemies and created new foes.

The third thing I think about is that it’s just more of the same fear-mongering that our established politicians use to ensure our votes. Vote for me or you’re in danger! Enemies everywhere! I’ll keep you safe, just give me more of your freedom, that’s all I ask! No thanks, I’ll brave freedom, danger and all.

Finally I think of the Tyrant. Such as they come to power by binding us with fear and we willingly, nay eagerly, give them our freedom. Fear is their stick and the promise of safety their carrot.

When I think about the United States and what has happened to us, it makes me wonder if we ought to think about changing the final line of the Star-Spangled Banner.

What do you think, Jeb?

O’er the land of the dependent, and the home of the fearful?