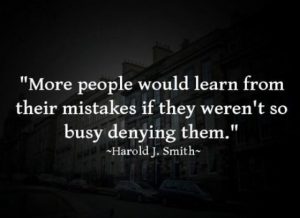 When you tell the truth, that means that you acknowledge mistakes. Mistakes are part of everyday life. But it’s how you deal with mistakes that ultimately determines success.

How many of you agree with that statement about how to deal with mistakes? Please pause for a moment and answer the Poll below and only then continue reading.

The person who said that quote it is one of the people running for President of United States of America.

There are other ways to deal with mistakes.

You can attack anyone who dares point out the mistake. You can pretend you didn’t make a mistake. You can give a fake or halfhearted apology. You can lie and claim you were just joking or being sarcastic.

But I want you to think hard about the second half of that quote. How you deal with your mistakes is going to directly effect the success you have following the mistake.

So, either Hillary Clinton, Gary Johnson, or Donald Trump said it. Do I need to tell you who?

One thought on “How you deal with Mistakes Determines Success”