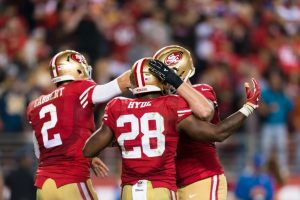 As my faithful readers well know, I’m from St. Louis and a big sports fans. I find myself in strange state of mind about the Los Angeles Rams football team that was, for a few years, my hometown team.

The Rams moved to Los Angeles for the 2016 season after moving from Los Angeles to St. Louis back in 1995. During their time here in St. Louis I was a season ticket holder and I watched two NFC Championship games and soared in joy as they won the year 2000 Super Bowl.

The team was largely dreadful their last few years here in St. Louis reaching mediocrity a few times but never better. They left under rather acrimonious conditions. This, by the way, is the second time my hometown NFL team has left. The Arizona Cardinals were my boyhood team and they left back in 1988. I think that plays a factor in my emotions about the Rams. A lot of people in town hate the Rams and were quite happy to see them get destroyed in their first game back in Los Angeles.

I didn’t stay up to watch the game but I did check on the score first thing this morning. I saw that they lost 28 – 0 and a quick perusal of the box score showed they clearly were outclassed. I found myself somewhat happy about this. Yet not particularly happy. I’m certainly a little sad that they are no longer here.

I think a lot of my lack of strong feeling on the subject one way or the other is that the Rams were not my first rooting interest. It’s very nice when you can cheer for one team your entire life. When it comes to the NFL I will never have that opportunity. I relish in my love of the highly successful St. Louis Cardinals and also my love of the less successful St. Louis Blues. If either were to depart for another city I would most likely slowly lose interest in the same way I’ve lost my passion for the Arizona Cardinals over time.

With the Rams, it’s more of a meh situation. I’m sad their gone but they were never really “my” team to begin with. Maybe that’s why I’m not relishing their defeat or hoping for their success. I just don’t much care.

Too bad. I’d love to have a hometown NFL team again. If that ever happens, I’m skeptical, I don’t want someone else’s team. I’d love an expansion team. One to call my own.

One thought on “Rams Smashed but Does that Make Me Happy or Sad?”