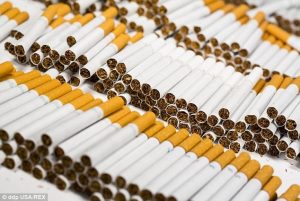 The state of New York has opened legal proceedings against UPS over the shipment of cigarettes to their state from Native American Reservations and it brings up some interesting questions about taxation as a whole.

At $4.39 New York has the highest tax rate in the country. A rate so high that shipping from other states and reselling becomes possible and profitable.

We live in a Union of States. Outside of Federal Law, these states are allowed to do as they please. New York is free to set their tax rates as they desire. I’m not going to discuss what I think about this rate. The purpose of the rate. Nor how the money is used.

What I’d like to talk about is the effect of the tax rate. It’s clear when a state has high taxes on any particular product where another state has a lower tax, we are going see this sort of behavior. In order to prevent people from bringing in product from another state the original state must pass laws making it illegal. Thus we are making something illegal that is going to be impossible to prevent.

If there is a profit to be made selling something to a willing customer in which the only entity “hurt” is the state, people are going to find a way.

I’m not opposed to New York instituting a high cigarette tax but I absolutely think it should not be illegal to purchase cigarettes in another state, ship them to New York, and sell them. The entrepreneur is making the original purchase, paying the transportation costs, and paying the expense involved in the sale. If it’s still profitable, good for that person or people.

New York is losing out on taxes but UPS and other shipping agencies are making money. The people involved in transportation and sales are being paid salaries. It’s capitalism. By making it illegal to bring in cigarettes from other states, New York is acting in an anti-capitalistic manner for no good reason.

It’s also better for the smokers in New York because they get a cheaper product. The only “loser” is the state. The state shouldn’t be trying to win. It’s should be trying to provide the best services possible to its citizens at a reasonable rate. If the state sets a tax rate on a product so high that entrepreneurs circumvent that rate; the state must either lower the taxes or accept the consequences. They should not be making the obvious outcome of their misguided tax policies illegal.

This is how the power of the state spirals out of control. Laws are passed not to protect and serve citizens but simply to ensure revenue.

And if you think that doesn’t cause harm I’d suggest you find out why a fellow named Eric Garner is dead.