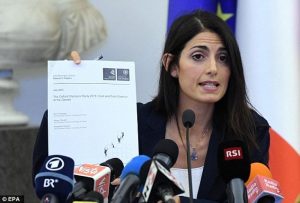 Mayor Raggi of Rome, Virginia Raggi, said no to the Olympics and that’s a brave thing to do.

To fully understand why this is a rather astonishing turn of events you should read my blog post on why the Olympics are so lucrative for certain groups of people. I’ll sum up quickly in case you aren’t interested in reading that post.

There are three groups of people who make huge sums of money from hosting such events. Olympic Committee members who are bribed by Politicians. Politicians who are in turn bribed by contractors. Contractors who are then paid to build and staff venues, and sell their wares during the event.

The money to pay the contractors comes from tax revenue.

What we must understand is in this situation Raggi is a member of one of those three groups. Not only is she a member of one of those groups but she associates with many other members. While it is certainly admirable of Raggi to forego the personal bribes she would receive from contractors it’s even more astonishing that she is willing to risk the wrath of her fellow politicians who will certainly attempt to punish her for essentially taking millions out of their pockets.

I don’t really have a lot to say about this that I haven’t said before in other posts. Just hearty praise for Mayor Raggi. Well done, ma’am. I’m afraid your political life might well be compromised. That you will face sabotage and backstabbing from your fellow politicians.

Politics is a tough game, even more so when you try to do what’s right rather than what’s profitable.

Buona fortuna, Mayor Raggi. You have at least one fan here in the states.