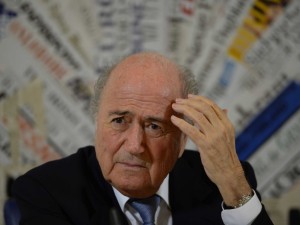 Hosting major international sporting events like the Olympics and the World Cup is an enormous money loser for the country that takes on the task. So why do countries bid for and apparently bribe officials to get the right to do so?

The common rational is that the prestige of such events brings the spotlight to a nation. That might be true but while I was working out and watching yet another story about the institutionalized corruption in the Federation International Football Association (FIFA) the reality suddenly dawned upon me. It’s all about the money.

If we understand the question more fully the answer becomes evident. The question should be: Who is it exactly that loses money?

Let’s take it back a notch. You go to Tutti Frutti frozen yogurt right down the street from where you live and purchase $5.00 worth delicious frozen dessert. As you are walking out the door you trip and spill your ice cream all over the raging hot cement where it instantly melts. You sigh sadly, turn around and purchase $5.00 more of yogurt because you have a problem with ice cream. Mmm, ice cream.

At first glance you have lost $5.00. But the reality is more complex. Yes, you have $5.00 less than when you started but Tutti Frutti now has $5.00 in sales more than they otherwise would have. The gain balances the loss. That is the nature of transactions.

In the case of the Olympics the nation in question is spending billions of dollars building stadiums, hiring thousands of people and paying their salaries, working with local businesses from restaurants to garbage disposal who see massive revenue from spectators. If a nation loses billions of dollars that money goes somewhere. It goes to the business owners who happen to be lucky enough to get the construction contract, have the license to sell their wares near the venues, and get the waste disposal bid. How does such fortune fall into their laps? Take a guess.

The politicians bribe FIFA with a percentage of the money they anticipate getting in bribes from businesses that want to make money during the event. Then the nation awards bids to these companies to the tune of billions of dollars which they pay off with taxpayer revenue.

So all this lost money belongs to taxpayers. The gained side of the equation are politicians and corrupt business owners who share the spoils. Those companies that choose to be honorable get no bids and are driven out of business by the unscrupulous operators.

Crony Capitalism on a level so enormous it’s difficult to fathom.

That’s why politicians want to host such events. My advice? Vote for better politicians.

One thought on “Why Host Olympics and World Cup … Money”