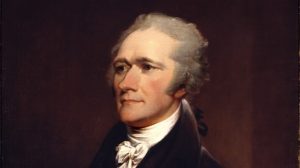 Shortly after the United States became an independent nation a fellow named Alexander Hamilton was put in charge of the treasury. The debt accrued from the Revolutionary War was a large issue and Hamilton wrote something called The First Report on the Public Credit that promoted the plan of Assumption.

Yipee, Tom, you might say. What does that have to do with President Trump and the modern world?

The idea is rather complex and sort of anti-common sense. Hamilton believed that if the Federal Government assumed all the debt from the various states, Assumption, those states would link their financial well-being to that of the central government. That is, if the union failed, the debt would fall back on the states. If the states had a financial stake in the union they would do their best to promote it and serve it.

This is a powerful idea against isolationism. If we are financially tied to other nations, they have a vested interest in seeing that we succeed, for then they succeed.

President Trump seems to be pursuing an America First agenda. The proposed tariffs would make it more expensive for other countries to do business in the United States. At that point they are given a choice. Pay the price or go elsewhere. Certainly some will pay the price in order to stay here but some will leave. As more and more decide it’s not worth the effort of staying they become independent of the United States. They have no reason to want us to succeed.

If we stop funding the United Nations it will suffer, most certainly. But the remaining member nations will soon realize they can do without that money. It won’t be as lavish. There won’t be as much waste. It won’t be as powerful. But we also will have little say in its operations. When we disengage we lose influence.

I’m not telling you that America First is a bad policy. I’m just telling you it will diminish our influence in the world. Other nations will learn they can do just fine without us.

If China decides they want to become world’s financial capital, something that could very well happen, it will mean an extraordinary shift in the balance of power in the world.

By allowing yourself to be tied to other people, other states, other nations; you make them work for your success. Their success is bound to yours and vice versa.

I just want to be very clear here. While I’m all for economic engagement with other nations I’m not for forcing regime change on those that don’t fall in line. I think we can do far more good in this world by linking people to each other financially than any soldier or covert operative working on regime change could ever accomplish.

I speak of nations and states in this article but ultimately I’m talking about individuals. When a person I play chess with in Iran wants to continue playing chess online with me, he or she doesn’t want me to die. Because it’s in his or her interest to continue the enjoyable chess games.

So it is with nations, states, and most importantly; individuals.

2 thoughts on “Isolation and Assumption or Hamilton v. Trump”