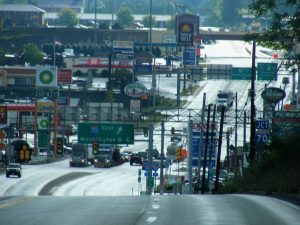 Self-Interest. That’s the mantra of this Objectivist. When I act in my own self-interest I help those around me. Now I read about the interstate near a place called Breezewood, Pennsylvania and it brings the philosophy into question.

Let me explain. Breezewood is a community that exists largely because there is a connecting road missing. Highway I-70 and the Pennsylvania Turnpike almost intersect at Breezewood … but they don’t. The reason they don’t is because travelers who want to get from one interstate to the other can’t do so without exiting one, driving through town amidst an almost constant traffic jam, and arriving at the other.

Without this little traffic jam the city would probably not exist. People would simply transit from one highway to the other without stopping. Some would stop for gas or a bite to eat certainly, but most would go merrily on their way. There is plenty of blame to go around.

Government regulation prevented tax dollars from building the interchange because one road was a toll road and the other was not. That regulation was removed eventually but the loop through Breezewood was already built by then. The Congressman from that district prevented any construction for years.

It’s clear millions of dollars and tens of thousands of hours of driving could easily be eliminated and yet it doesn’t get done because the people who live there don’t want it done. It’s in their interest not to have the interchange.

Where does that leave this objectivist? The people of Breezeway are doing exactly what my philosophy says they should do. Act in their own self-interest. In doing so they are inconveniencing many, many more people. They are wasting time and money. They are causing unnecessary pollution. What they are doing clearly helps those immediately around them but hurts the vast majority of people who travel that part of the country.

I’m all for the people of Breezewood doing what they think is in their best interest but where are the politicians from Pennsylvania and the United States? It’s in their interest to build that interchange and save a lot of people a lot of hassle. Yes, jobs will be lost in Breezewood. People will suffer. That’s the nature of the world.

It’s not always easy to be self-interested. The people of Breezewood live together, vote together, have a common issue. Those who need the interchange do not. It is more difficult for them to act in unison. I admit it.

We live in an age where people can share information and causes at the click of a button. With the right leader and a strong voice that interchange would be built. I still believe in self-interested objectivism but it’s not always easy.