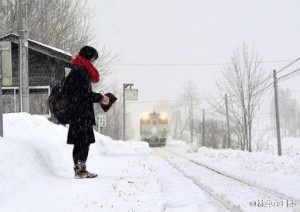 There’s a rather sweet little story making the rounds on Twitter, Facebook and various media outlets about a rural train station in Japan that was scheduled to close. I’m sure a few of you have read it, smiled, and gone on about your business.

Would that I was capable of accepting such little moments of happiness without question. Nope, you guessed it, ding ding, bullshit alert going off, must check it out.

The story goes that a train station in a rural area of Hokkaido was sparsely used and scheduled to be taken off the schedule. It turned out a lone schoolgirl used it to get to school so management kept the station open until her graduation. They even went as far as to adjust the schedule of the train to meet with her needs.

Judging by the comments I read on the story, people seem to think the girl is the only passenger. That the train is merely running to get her from her rural station to her school. They also seem to be of the opinion that it was some sort of wonderful testament to government in Japan. Even if we take the story at face value these inferences are both incorrect.

It is just one of many stations along a rout. The trains are running in any case, they just were scheduled to bypass that station thus forcing the girl to travel further to another station to catch a train.

Also, the Hokkaido Railway Company is a private enterprise so even if they did do what was being claimed in the story, it has nothing to do with government but instead private industry.

The real story is that the girl actually uses another, nearby, station along with a number of fellow students. There is only one train in the morning but there are three possible trains that drop them off in the evening. This station, along with the one in the story, are actually scheduled to be closed later this year, in line with the news reports, but it apparently has nothing to do with the girls.

This means passengers from that rural area, the schoolgirls, will have to drive further to get to a larger station in the future.

What I find most interesting about this entire episode is the combination of misinformation and poor comprehension.

The story itself was largely false. The stations were being closed on a schedule that has nothing to do with the girls, the timetables weren’t adjusted, and there is more than one girl.

But even if we take the story as truth, the vast majority of people seem incapable of figuring out what was actually written. They read that the train had a single passenger and the government was responsible for keeping it running despite the fact the story said neither of these things.

Their minds turned what was written into something that better fit what they hoped it would be. Astounding!

Do you think there are any lessons to be had?