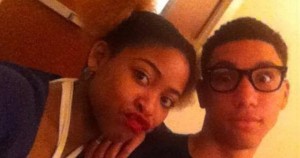 I just learned of the case against Cormega Copening and Brianna Denson and, yet again, I shake my head in dismay.

Cormega and Brianna date. When they were both sixteen years old they sent one another sexually explicit photos. The police took Copening’s phone while investigating another incident and found the pictures. They then went to Denson and took her phone finding similar pictures on it. Denson reached a plea deal in which she was fined $200 and given a year’s probation. Copening is facing five counts of sexual exploitation each with the possibility of two years in prison and a lifetime listing as a sexual offender.

In an interesting side note, the state of North Carolina is of the opinion that Copening and Denson at sixteen were legally allowed to have sex with one another and be charged as adults, but were not old enough to send sexually explicit pictures of themselves to each other.

Let’s imagine we live in a grown up country instead of the great do-good, nanny nation the United States has become.

It shouldn’t be illegal for anyone, of any age, to willingly and without duress send a picture of themselves to someone else regardless of sexual content.

I get the moral outrage of we must protect the children! I understand that someone might well be tricked or coerced into sending a compromising photo of themselves to a second party. I don’t want to get into far ranging discussion today. We could talk about an adult tricking or manipulating a young person into sending such photos. I understand the possibility of third parties becoming involved in transferring such photos. I get the idea that demand for child pornography creates suppliers. But none of that is the case here.

The problem here is largely a horrible law. It’s illegal for a minor, under eighteen, to have sexually explicit photos on their phone. The most serious of all the charges Copening faces are third-degree felonies for having sexually explicit pictures of himself on the phone! I repeat, of himself. He took them with the intention of sending them to Denson and had them still on his phone when the police confiscated it. He is both the defendant and the victim!

If anyone under 18 does not own the right to their own images what else is left for the government to take?

I even understand the police and prosecutors who are merely applying the law as it is written in North Carolina. That’s their job. They might have decided to prosecute this case simply to point out the insanity of the legislation, hoping to get legislators to make changes.

Why do we care so much about people, even those under eighteen years of age, willingly sending sexual photos to each other? It’s their damned business!

Why are we so obsessed with everyone else’s private and personal business?

How on earth did we get to a place in this nation where a seventeen year old boy can be sent to prison for having naked pictures of himself on his phone?

P.S. The picture I included at the top is an adorable image of the couple having fun for the camera, it was on their Facebook page but is now out and about on the internet.