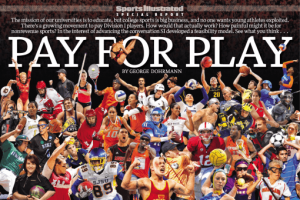 There is a profound difference in the nature of a so-called student-athlete and a student and I think many people fail to realize it. Why does this come to mind? Because a fellow named Don Yee, who happens to be the agent of Tom Brady, wrote an opinion piece over the weekend suggesting, among other things, that Clemson and Alabama college football players should refuse to play in the National Championship game.

It’s an interesting piece and talks about the inequality of the financial situation between players and virtually everyone else. I wrote a blog on the same subject back in June of 2013 that echoes a number of the points Yee makes. Yee focuses on race and I largely disagree with his assessments in that regard but it’s not the topic of my blog today.

While reading the passionate comments under Yee’s post I found a common thread. The idea is that the student-athletes should be more than happy with the opportunity to attend college without cost. The students would very much like this arrangement for themselves.

People equate the student and the student-athlete to make this argument. Gosh, lots of kids go way into debt to pay for college is the common thought. The reality is that the two are virtually the opposite of one another in an economic sense.

On the other hand, the student-athlete is being paid to play football. The school is the consumer and the player is the commodity. The school’s representative all but begs the athlete to come to that school rather than sell his services to a rival. The player then provides entertainment that generates a large amount of revenue for the school, coaches, and many others. The payment the player gets is an education, exposure for a future career, and various other things.

These are fundamentally different. We cannot compare the student with the student-athlete because they are essentially opposites of one another from an economic perspective.

In the meantime, the student-athlete has noted that coaches are getting paid a lot more than they were twenty years ago. The student-athlete has noted the total amount of revenue generated from the games has gone up by a tremendous amount but their salary remains the same. They want a raise and who are we to tell them they should be “satisfied” with their current rate of pay? That they are “greedy” for wanting more? Would you tell a co-worker those things? Of course not.

Should they get a raise? That’s not my business. It’s between the schools and the student-athletes but I certainly think it’s their absolute right to ask for a raise and not perform if they don’t get. Likewise the school might fire them and give the scholarship to someone else. That’s a labor negotiation which is exactly what is happening.

On a happy note, things are actually moving toward a much more equitable state. The student-athletes in the Power Five conferences now receive a stipend of several hundred dollars a month, access to as much food as they can eat, and their families no longer have to pay out of pocket to attend Bowl Games (trips which can be quite expensive, particularly for low-income households). The horrific system where scholarships were revoked if a player got injured or failed to perform has been abolished.

The NCAA and the colleges seem to have recognized the inequities that the system engendered and are working to fix them without going to a purely professional system wherein each player is negotiated with separately.  These are good things. A reasonable pay increase for the players without destroying the nature of the system. A win/win.

It makes an old cynic proud.