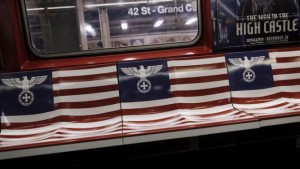 Make believe fascism is a good thing. Let me explain.

In 1962 an excellent writer named Philip K. Dick wrote a novel called The Man in the High Castle.

Amazon has now produced and is releasing a television series based on the book. The book is an alternate history tale in which the United States and the Allies were defeated by the Axis powers in World War II. In it the United States is under the control of Nazi Germany and Imperial Japan.

Amazon has been publicizing the upcoming show in a number of ways and they recently draped a New York City shuttle with imagery mating United States symbols of those of Nazi Germany and Imperial Japan.

As you may know, New York City is home to a large Jewish population. Offense was taken. That particular advertising campaign was removed.

What is fascism? It is radical and authoritarian nationalism. It is essentially the antithesis of Liberalism (in the classical sense) and of freedom as a whole.

I don’t want to get into a discussion about the definition of fascism and who is or who is not a fascist.

My topic today is to state that make-believe fascism, like the Man in the High Castle, is a very good thing. Advertising that strike us viscerally, as did the Amazon campaign, is a good thing. It’s important to be able to recognize fascism. If we do not recognize it immediately then we are suspectible to its seductive message.

There is political rhetoric making the rounds in this election cycle that rings of fascism. There are certainly some people commenting on this rhetoric and recognizing it for what it is. That’s a good thing. But a lot of people who support this sort of talk seem to be completely unaware of its fascist origins. That’s a bad thing.

I recognize fascist talk because I’m a student of history. I know that Imperial Japan and Nazi Germany used xenophobia to mobilize their people. I know how they used fear to lure people into giving away their freedom. I know how they used hate to turn a nation upon itself. How they manipulated the fear of average citizens to ensconce themselves with absolute power.

The fact that a great number of people don’t know these things is dangerous. When someone fictionalizes fascism, shows us what it truly is without actually creating a fascist state, we should embrace it. We should expose it to as many people as possible.

The shuttle covered with symbols of United States mated with those of fascist states is disturbing and rightly so. The solution isn’t to ban such displays but encourage and understand them.

If we hide the true nature of fascism because it is so awful, do we do ourselves a service or a disservice? Do we help our nation or harm it?

In order to combat evil you must be able to recognize it. Expose evil to the light of day. Explain it. Show how its seductive lure can entrap the unwary.