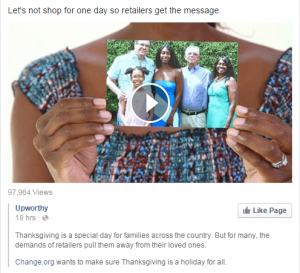 On this Thanksgiving Day I see on my Facebook scroll many posts about how the evil, awful retailers have destroyed the day of family and made it all about consumerism and shopping.

The image I’ve posted it but one of many similarly themed posts. It’s not a big deal but it still rubs me the wrong way. Why you ask? I’ll tell you why!

That hypocrisy is only the first thing that bothers me about this entire anti-shopping Thanksgiving trend.

The general theme of the movement is that the evil, awful retailers are destroying families by forcing them out of the house on this holiday. Well, golly, maybe people want to get out of the house and do some shopping. Maybe retailers are simply supplying a demand. Maybe if no one actually wanted to shop on Thanksgiving, retailers wouldn’t open their doors which in turn causes employees to work.

I’m not saying that people should shop on Thanksgiving or that workers should have to work on Thanksgiving. I worked Thanksgiving morning and early afternoon at the golf course every year. We generally closed around 2:00. My gym is open this morning. Thanksgiving is a day off and people generally like to get things done on that day off. That means people employed in service industries have to work. It’s the reality.

I get that you think it’s supposed to be for families. That’s great. Spend it with you family. But don’t try to shame other people for doing what they want to do. Shop. Play golf. Browse online. It’s not the retailers fault for giving people what they want.

It is, however, Upworthy and their ilk’s fault for trying to fool you with deceptive advertisements. Trust me, Upworthy’s marketing team doesn’t care about making sure Thanksgiving is a family holiday, they care about those clicks. Don’t be fooled.

Have a great Thanksgiving!