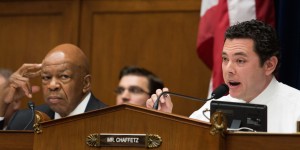 If anyone possibly needed a more damning indictment of politics in the United States of America you couldn’t find a better example than the reaction to Representative Kevin McCarthy’s statement that the current Benghazi Probe was about tarnishing the image of Hillary Clinton.

The statement itself is rather remarkable but the reaction from the Republican Party is predictably nauseating.

I’ll sum it up quickly for those who aren’t following the story.

There have been several investigations into what happened when four U.S. citizens were killed during an attack on the U.S. Embassy in Libya. Clinton was Secretary of State at the time of the attack and there was thought that her inaction during the attacks was ultimately responsible and that her office lied about events leading up to the attacks. All completed investigation largely found no evidence of wrongdoing from Clinton or the administration.

McCarthy made a statement indicating that the current investigation had succeeded in its purpose of damaging the reputation of Clinton.

I would like to say it’s the reaction to that statement that bothers me but I cannot do so with any honesty. The reaction is completely and totally expected.

Republicans are largely calling on McCarthy to apologize for making the statement and reiterating their opinion that the current investigation has nothing to do with tarnishing Clinton’s reputation but is simply aimed at getting to the truth of what happened. Republicans are furious at McCarthy for telling the truth and insisting that he go back to lying. They want him to apologize to the families of those killed in Benghazi because if the investigation is about tarnishing Clinton, it is about politics and spits on the memories of those who died.

What more do you want as proof as to the dysfunctionality of our government? Of the willingness, eagerness, slavering devotion to lie, lie, lie, and lie again?

The investigation is about politics! It does spit on the memories of those who died! Everyone knows this. Everyone. Yet the lie must be maintained.

In our Republican and Democrat led government the truth is to be avoided at all costs. The truth is the enemy. Winning the election is of far greater priority than good governing.

What more evidence do you need that something is horribly amiss?