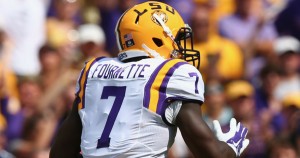 I regularly rail against the NCAA and their exploitation of athletes, er pardon me, student-athletes, for financial gain but today I move up the chain to the NFL which has a rule preventing a fellow named Leonard Fournette from getting a job.

It works like this. The National Football League refuses to allow any player who has used less than three years of college football eligibility to enter the NFL draft or join a team. Technically Fournette could simply play one game of college football, sit out the remainder of that year, two more years, and then be drafted. Many people are urging him to simply sit out the remainder of his college eligibility and then get drafted. It is fairly certain he would be one of the top picks in the draft which comes with it a salary of approximately $15 million over four years.

If he continues to play he doesn’t increase his potential salary, as he is already at the apex, but he does risk reducing the compensation either through poor play or catastrophic injury.

Every other student in the college, including those on various scholarships, can leave at any time for a professional career. There are no restrictions on any of them. None.

There are any number of reasons for the rule as it exists. The NCAA makes huge amounts of money on the athletes, er pardon me, student-athletes and serves as a free farm system for the NFL. The current rule ensures the NCAA that its best players must stay and perform for the price of an education that is a fraction of the salary Fournette would get if he left.

There are also many arguments as to why the rule is “good for the student-athletes”. One reasonable argument suggests that they might be tempted to leave school before they are ready for the NFL and thus not get the financial remuneration they expected. Another argument suggests that they are being “paid” for their services via the scholarship. I’m sure other people can come up with more arguments but I find them all lacking.

I’ll take it even further. I find the entire draft system as used by sports teams to be repugnant. Restricting a person to negotiating with one company because they “drafted” you? Ridiculous.

Further yet? Sure. The rookie compensation formula is clearly illegal. It removes the ability of the player to negotiate fair compensation for their services. The player is simply “slotted” into a particular salary based upon where they were drafted.

There are reasons for the draft and the slotting system. There are reasons for the NFL to restrict players from leaving the NCAA. I hear all those reasons. I acknowledge them. I understand they are helpful in many ways. Without them organizing a professional sports league is difficult. Yet, they are wrong. They should all be abolished. Free market, fair compensation.