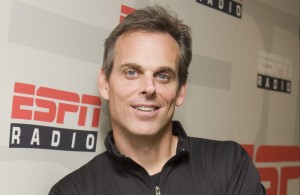 I’m sure a great number of people are not aware that something called Competitive Gaming, or eSports, is becoming a major sporting industry.

In a recent interview an ESPN commentator named Colin Cowherd said some fairly nasty things about people who participate in eSports, and by association those who watch them.

The rise of eSports can be seen on outlets like Twitch and competitive events have prize pools in the tens of millions of dollars. The sport is played on a highly competitive level by incredibly skilled eAthletes.

What I want to talk about today is not necessarily eSports or Cowherd but simply the idea that people who share an interest can get together and enjoy what they love at a level unprecedented in human history. Because people can thus freely associate the ability to monetize their interest through capitalism becomes a reality. This is important.

Why is this so important?

The phenomenon of people of like interests freely associating across all geopolitical boundaries signals the first stages of the end of the nation state. I’m a Libertarian and I have friends who are anarchists although I’m not one myself. We share many ideas and one of them is that people should be able to associate based on their interests, not on the happenstance of their geographic and political positions.

Until recently humans were only able to associate with those in close proximity to their geographic location. With the advent of faster methods of travel people were able to travel further to associate freely although the limits of political borders placed a heavy restraint upon that travel. With the creation of the internet those borders are quickly vanishing.

I love chess and I play games almost every day with people from places like Russia, Iran, Iraq, Latvia, Armenia, Texas, England, and many more. They likely have all sorts of opposed political ideologies. They almost certainly disagree about quite a number of things but they love chess. They gather at various websites to freely associate with others who love the game. Their desire to come together has spawned websites that make money from their association either by advertisements or by membership dues. The chess players willingly pay a price in order to be able to gather with those who enjoy the same thing.

I want you to imagine a world where you can associate with people who enjoy the same things as you. That you are not bound by a nation that herds you into a pen. You are not bound by political ideology and kept from those who love what you love. What would such a world look like?

Would people with political differences be less likely to engage in war with those they associate with on other levels? I think so.

Would the nation state be able to demonize other nations when the citizens of their nation freely associate with those across the border? I don’t think so, not as easily at least.

Can the nation state withstand the onslaught of free association regardless of borders or ideology? I think, I hope, no.

When people are free to do what they love regardless of borders why would they care about arbitrary lines drawn on a map? There are no borders on the internet, would that the world would soon follow. As travel becomes easier and faster we gain the ability to go where we want, when we want, with whom we want.

The end of the nation state? A pipe dream or a fast approaching reality. You tell me.

Oh, and, Colin Cowherd, you’re an idiot. If you don’t like something then don’t do it. Lots of people don’t like football but don’t feel the need to insult you because you do. Take note.