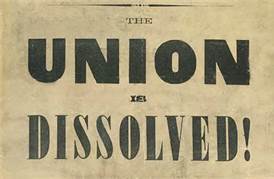 Today I want to talk about the idea of part of a state seceding from the whole and becoming their own state. The main thrust of my talk is why I don’t approve. Why I think those making such suggestions are quitters and whiners. But first, a history lesson. Those wanting to get to my opinion can skip down a few paragraphs.

New States may be admitted by the Congress into this Union; but no new States shall be formed or erected within the Jurisdiction of any other State; nor any State be formed by the Junction of two or more States, or parts of States, without the Consent of the Legislatures of the States concerned as well as of the Congress.

That’s it. That’s the Constitution of the United States. That is the rule.

The last one is the one most interesting from a legal perspective because Virginia had already seceded from the Union on its own and didn’t vote to allow the western counties to leave, a necessary legal precursor. The U.S. government argued that because Virginia didn’t consider itself part of the Union that the Constitution didn’t apply. However, it was the policy of the U.S. government throughout the war that the secession of the southern states was illegal and they never really did leave the union. This, in my opinion, makes the entire state of West Virginia an illegal state.

When I’m in charge; back to Virginia with you!

Anyway, I’ll finally get to the point of my blog today. People become upset when their political views are not popular enough to win electoral victory. They lost an election. It happens. Rather than try to diligently spread their message, to convince people of the righteousness of their cause, they simply stomp off in a huff declaring they’re taking their toys and going home. Cry me a river. Little babies.

We live in a country with free elections. I’m tired of people trying to change the rules be it election reform laws (designed not to make elections fair but to disenfranchise voters who disagree with a particular party), gerrymandering (drawing up election maps designed simply to get more seats in congress that have no basis in geographical reality), talks of secession, or anything else.

We live in a time where anyone can get their message out. I’m an Atheist Libertarian. I feel trodden upon all the time. My party managed to convince a whopping one out of every one-hundred people to vote for us. Do you see me trying to change the laws so I can win? Trying to form my own state of Libertarians?

What you seeing me doing is writing my novels, writing this blog, talking to my friends, my family, and trying to explain my position. Trying to explain why I think the ideas I espouse are good for the world, good for the United States, good for my beloved Missouri. If I do a good enough job then Libertarians will start winning elections. If I don’t, I’ll continue to be in the minority.

I don’t blame Republicans and Democrats. I don’t think my friends who don’t vote Libertarian are Sheeple incapable of making a decision on their own. I think we are an educated electorate and we largely vote for the candidates who we best think will represent our point of view.

I lost the last election and the all the ones before that. I’m not holding my breath, whining, and taking my toys home. I’m out here trying to convince people I’m right, and I’ll continue to do so.

If you want to win an election; show people your ideas are better. It’s that simple.

Tom Liberman
Sword and Sorcery fantasy with a Libertarian Twist
Current Release: The Sword of Water ($2.99, buy it, read it, review it)
Next Release: The Spear of the Hunt

One thought on “Secession Chatter”