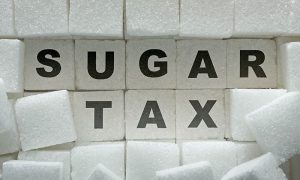 A new study suggests taxing sugar is a far better way to control the enormous cost associated with unhealthy citizens of the United States than product specific taxes. I have no problem with the conclusion of the study, it’s most likely correct even though it is based on simple economic models rather than actual implementations. I do, however, have a problem with using taxes to control the behavior of citizens.

Let’s assume it is completely accurate to forecast an obesity drop and a correlating reduction in the diseases that come from being overweight; heart disease, diabetes, arthritis, cancer, and others. If this sugar tax was put into place we could expect to see a substantial savings in healthcare costs associated with the treatment of all those disease. We’d see fewer missed workdays. There are any number of societal benefits to a healthy population, this cannot be denied. I’m all for these results if not the methods.

What are some of the arguments against such taxes? There are certainly undesirable impacts on the sugary drink industry but these negatives are presumably offset by gains in other places. If people move away from sugary drinks they will move to something else. Perhaps they will purchase more tea or water. So, not a bad thing you might say. I’d say, yes, very bad thing. The industries so benefiting have a competitive advantage against the sugary drink companies brought on by government intervention, capitalism has been subverted by crony capitalism. Frankly, I wouldn’t be surprised if the attempts to tax soda and the funding for studies like the one I referenced earlier were not coming from such industries. When the government becomes involved in which company succeeds and which company fails; then such businesses are forced to attempt to corrupt government as a means of survival.

We know for a fact the producers of sugary drinks will see the cost of their products rise. This is the desired outcome. When the price rises, people stop purchasing. Well, at least some people. The reality is many people continue to drink such beverages but now have less money to spend on other things, perhaps a new cellular phone or deck for their house. Each dollar we take out of consumer’s pockets must be accounted for on the scale. Thus, the effect on many industries is negative, not just the sugary drink providers.

The idea of taxes in general is to support government programs. We pay a gasoline tax largely to fund road related services. In this case there is no correlating service. We’re merely doing it to try and get people to behave in a way the government thinks best. This deeply offends my Libertarian ideology.

I think it is important to consider the government’s role in milk and cheese production. Our tax dollars go to these endeavors including advertising campaigns. The consumption of such food is not necessarily healthy. If we trust the government to promote or demonize one thing, we cannot be upset when they do so for many different things. This is my biggest problem with a sugar tax. By empowering the government to tax simply to engineer a particularly desired behavior, we essentially give them carte blanche to promote any such behavior.
I do not think it takes a leap of logic to understand that unscrupulous business owners will immediately look to subvert this supposed altruistic process. They will immediately, let’s be honest, they are already, attempting to get government to work for their industries.

Even when the government is right, sugar filled drinks and food contribute to obesity and we should probably be eating and drinking less; we cannot allow it to act as an agent for or against a particular industry. The more government has the ability to shape our purchasing habits, the more it will become corrupted by industry.

In essence, the government will simply become a corrupt agent of particularly industries. This is not its intended role. Sadly, I’m of the opinion we are well on our way to such a state of affairs. It does not bode well.

One thought on “Should We Tax Sugar to Reduce Obesity?”