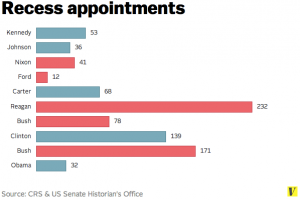 The President of the United States is granted the power to fill vacancies that occur when the Senate is not in session. This is called a Recess Appointment. It’s clauses like this one: Article II, Section 2, Clause 3; that remind me why it’s so important that the Constitution has a mechanism by which it can be changed.

The Constitution orders the Senate to provide advice and consent for certain appointments. The reason the Recess Appointment clause exists in the first place is simply because, early in the history of our country, the Senate took recesses of anywhere from six to nine months out of each year. If a vacancy occurred in this period, a position might go unfilled for a considerable time.

The situation is quite different today. At most, the Senate takes a two-month vacation and usually not even that long. Any vacancy can now be filled fairly quickly. In addition, advances in communication and the speed of travel means the Senate can reconvene for an emergency session with less than a couple of days’ notice.

Unfortunately, what has happened in recent times is that various presidents waited until the Senate went on recess in order to make an appointment they felt might not pass successfully through that body. In the current situation, the sitting President is speculated to be considering the idea of creating a vacancy during a recess simply in order to fill it without advice and consent of the Senate. Both of these behaviors are clearly perversions of the original purpose of the power.

If this is allowed, it seems to me the Senate can then by bypassed completely. The President can appoint someone pleasing to the Senate, wait until just before the recess, fire that person, and then bring on whomever they desire without a confirmation. This can be continued on for the entirety of the term.

That’s why it’s time to remove that particular clause from the Constitution. Times have changed and the Recess Appointment is no longer necessary or needed. Amending the Constitution is a thing not to be taken lightly and it requires either a two-thirds majority in the Senate and the House of Representatives or a two-thirds majority of votes by the states. Yet, the power to do so is there and it is there for good reason.

The Recess Appointment clause is being abused and it must go. It’s really as simple as that.

There is one other solution. I don’t think we’ll see it, but there is some possibility the President of the United States could treat the Constitution with the respect it most certainly deserves. The President of the United States could stop looking for ways to pervert the Constitution and simply abide by its clear intent. Only use the Recess Appointment when an important vacancy comes up naturally; usually death or serious illness.