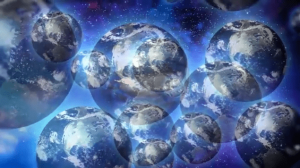 I’m quite confused by why people seem to think that infinite equals all-encompassing. This seems to me to be one of the core ideas in the concept of the multiverse. This is to say, if there are an infinite number of universes, then all things must be represented in them somewhere or another.

Let me preface my article with the simple fact that I am not a theoretical physicist. My understanding of the Multiverse, or at least the postulations of such, might be mistaken. I’m going to continue on with my thoughts here as if my understanding is correct. If that’s not the case, I’m hopeful someone will explain it to me more clearly.

I’ll further mention one of the main purposes of this discussion is to further my ideas of atheism, rather than a fundamental understanding of the universe.

My understanding of the Multiverse is that it is infinite. That there are an infinite number of universes within the multiverse and therefore in one of them I am dating Jennifer Aniston. Now, this is certainly a pleasant thought, but I don’t think it is true. My main problem is the supposition that infinite must mean all-encompassing. If there are infinite universes, then all things must be represented in them.

Where this correlates with my atheism is when I hear this argument from those who believe in an omnipotent and omniscient god. If there is a multiverse then there is the possibility of such a god. If such a possibility exists, then it must exist because of the infinity issue.

The entire idea that infinity equals all-encompassing seems to me to be quite easily falsified. If I have an infinite list of even numbers, nowhere on it is an odd number. Nor can any delightful bowls of Ben & Jerry Cherry Garcia ice cream be found on said list, sadly. Infinite clearly is not all-encompassing. Therefore, it stands to logical reason that while the Multiverse might well be infinite, that does not mean any particular thing can be found within it. In none of the universes am I dating Aniston, again sadly.

It’s clear to me there are many things that do not exist in the universe. The last digit of Pi for example. The last digit at all. An integer that calculates exactly the square root of any prime number. There are almost certainly far more things not in the multiverse than are in it. Is there a pink unicorn named Edwina? Are any of the characters from my novels a real person in any of those universes? Of course not, although perhaps we can’t prove it logically as we can with mathematics. It’s mere common sense.