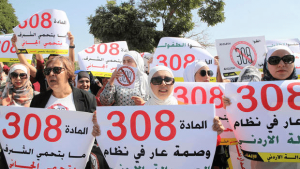 Many people are cheering the government of Jordan for removing a clause in their legal code by which a rapist is exonerated of their crime if they marry the victim. I, on the other hand, find this attack on biblical morality an affront to religious freedom.

The bible is quite clear on this subject. Deuteronomy 22:28-29: If a man is caught in the act of raping a young woman who is not engaged, he must pay fifty pieces of silver to her father. Then he must marry the young woman because he violated her, and he will never be allowed to divorce her.

In the United States, the First Amendment to the Constitution is quite clear about Religious Freedom. The government shall pass no law that infringes on my right to practice religion freely. In the Bible, it is stated quite clearly that if I choose to rape a woman who is not engaged or married, my punishment is that I must pay fifty bucks to her father and marry her. That seems like plenty of punishment to me. I mean, maybe I just wanted to rape her because she was wearing really hot clothes and showing a bit of ankle. A man has his needs. Now I’ve got to marry the ho and I’m not even allowed to divorce her!

Before this affront to my religious freedom I would have applauded Jordan for applying biblical morality to their legal code and only wish the United States, whose own legal code is clearly and completely based on the bible, do the same. I mean, if I want to beat my slaves and they don’t die within a day or two, that’s totally my right. If I kill a dude who has the nerve to say God Damn It and thus violate the Third Commandment, I’m merely following biblical morality. It’s clear to me punishment for such a crime should be death, I mean, it’s third on the list of commandments and therefore of greater concern than murder.

Jordan has caved to the pressure of secularists who somehow think that men can come up with morality that is more just than that provided by an all-knowing, all-powerful God. If God says a rapist must marry the victim then that’s the way it should be, not to mention the $50 bucks!

Now, I know some namby-pamby, cry-babies are going to say, hey, what about the woman who was raped? Maybe she doesn’t want to marry her rapist. Give me a break, she’s soiled property now. Nobody is going to marry that ho after I raped her. I’m far and away the best options she’s got. I’m doing her a favor.

I don’t understand how people can possibly imagine the word of god has less weight than any legal remedy created by men. I mean, it is men who create the legal code. Women exist merely to glorify me and tell me how great I am. That’s what a wife should be doing, serving her man, by that I mean the fellow she is lucky enough to marry after he rapes her.

Secularists can suck it! Don’t cave my Jordanian brothers! Reinstate the Rape Clause because that’s what God says.