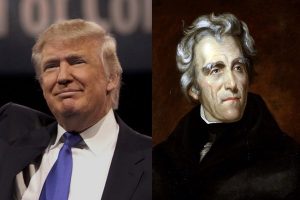 President Trump is of the opinion if Andrew Jackson was President of the United States around the time of the Civil War that he might have prevented it from occurring at all. It’s an interesting premise in a number of way.

Firstly, Jackson actually was president near the time of the Civil War. He left office only twenty-four years before hostilities broke out and the long simmering dispute was in full bloom during his term. While president, Jackson presided over what is called the Nullification Crisis. Jackson’s actions all but caused the Civil War to start earlier.

Legislators in South Carolina believed federal tariff laws were hurting the state’s economy. They passed legislation that essentially said laws created by Congress could be nullified by the states. Jackson sent in troops and eventually South Carolina, after some negotiating, backed down.

I suspect when Trump makes the suggestion that Jackson would have prevented the Civil War, he is referencing the Nullification Crisis and the resolution therein. It’s an interesting history lesson in what can happen in a short period of time. The twenty-four years that elapsed after the crisis and the beginning of the Civil War were dramatic.

The two presidents that preceded Lincoln were Franklin Pierce and James Buchanan. Both men knew the terrible danger of Civil War and did their best to appease the southern states and avoid the calamity. It is generally thought their inaction led to the conflict because it emboldened the southern states. They believed the northern states would never allow the country to go to war over the question of slavery.

Lincoln, on the other hand, was far more of a Jacksonian. He called the bluff of the southern states but, unlike at the time of Jackson, these states were now ready to push the issue. Thus, the Civil War began.

When Jackson made his stand, the circumstances were far different from the situation Lincoln found himself in. The lesson is important. We can learn from history but situations change. An action that led to one particular outcome yesterday can lead to an entirely different one tomorrow.

There is an apt idiom stating: A little knowledge is a dangerous thing. The idea is that someone who knows nothing about an issue generally does not attempt to fix a perceived problem. On the other hand, someone who has a small amount of knowledge might be willing to make a fix, but because their information is limited; that solution causes enormous problems.

Issues are enormously complex and fixes difficult. There is often no perfect solution to a particular problem. In the case of the Civil War, the two paths were both rather awful. One was the Civil War and the other was to continue to allow the abomination of slavery along with permitting the southern states inordinate power in comparison to their voting bloc.

The Civil War, it’s causes, and the events leading up to it are part of a complex tapestry that is not particular easy to piece together. What President Trump seems to be saying is that Jackson could have bluffed the south away from the issue of slavery. That by threatening them with war, they would have voluntarily abolished the peculiar institution. That is an example of making statements with little understanding of the issues involved.

That being said, his admiration of Jackson’s forthright style has merit. Someone should tell him that Lincoln was cut from the same cloth. That’s why the Civil War happened when it did, because Lincoln was behaving just like Jackson.