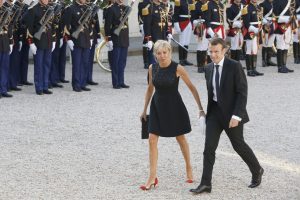 One of the leading candidates to become the President of France is married to Brigitte Macron and their relationship brings up a number of interesting legal and societal questions. Emmanuel Macron met Brigitte when he was her fifteen-year-old student at La Providence High School in Amiens. She was thirty-nine at the time. They official announced they were dating when he turned seventeen.

The two eventually married when Emmanuel reached the age of thirty, shortly after she divorced her husband. He is the step-father to her three children, the oldest of whom is older than Emmanuel. All of this came to my attention thanks to a Facebook post expressing disgust at the relationship. Let the comments begin.

Some people are horrified by the age difference, while others don’t think it is anyone’s business. I’m certainly in the latter group. If people want to carry on affairs outside of marriage, I don’t much care. If a young man falls in love with an older woman, I don’t care. If an older woman has a relationship with a younger man, I don’t care. If a teacher and a fifteen-year-old student have an affair, I don’t really care. I know that last one is going to raise some ire.

The teacher is in a position of responsibility over a student and such an affair raises all sorts of questions about coercion. In the United States, if such a relationship occurred and was proven, Brigitte would have been tried and likely put in prison.

What’s important is that some people do care, and they have every right to their opinion. If they are outraged by this marriage, that’s their business to be disgusted. I don’t much care they are revolted. I think people are way too concerned about how other people carry on with their lives, but I’d be a hypocrite if I told them they shouldn’t be disgusted. That’s their choice.

If someone refuses to vote against Emmanuel because of this relationship, that is his or her right. If someone chooses to ignore the relationship and vote for him, that is also her or his decision to make.

The fact the two are now married leads me to believe their love was best for them, despite the age difference and the circumstances of their meeting. Certainly, you might disagree.

As a Libertarian I think it’s extraordinarily important people be allowed to their opinions and nations keep laws to a minimum. One of the first thing Totalitarian leaders do is attempt to force people to behave in certain ways. They do this primarily through legislation and personal attacks. The more power we vest in the state, the greater its ability to force us into a particular version of moral right.

Emmanuel and Brigitte have a relationship many might find disturbing. The fact they are legally allowed to do so is a good thing, and so is the right of some to withhold support for Emmanuel based on that relationship.