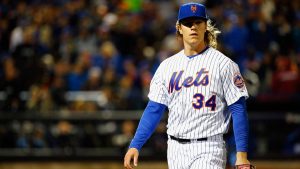 An interesting situation I’ve been following in Major League Baseball regarding star pitcher Noah Syndergaard and a possible injury has been resolved, but it still raises interesting questions. Syndergaard seemed to have an injury to his shoulder and the New York Mets wanted him to see a doctor and receive a Magnetic Resonance Imaging to determine if there was any damage. Syndergaard refused.

Syndergaard then had a terrible outing in his next start and injured his side. He will now acquiesce to the Mets request and have a MRI. What right does Syndergaard have to refuse medical advice from the team and what expectation does the team have that he will follow such advice? Interesting questions.

There is a huge amount of money involved; although as a restricted player, Syndergaard earns a relatively small amount compared to his peers. He is considered one of the best young pitchers in the game and his presence on the mound sells tickets. The Mets have a vested interest in attempting to keep him as healthy as possible. Syndergaard himself is likewise motivated. If he stays healthy he will eventually earn a tremendous amount of money.

All this is rather tangential to the point. If the team wants Syndergaard to undergo a particular medical treatment does he have to do so? The answer is no, he does not. Syndergaard made a decision and the team has no ability to force him. Naturally, there are repercussions for such decisions. The team might base future contract negotiations on this refusal. Other teams might view the refusal in the same light. In the end, it is the player’s choice.

Syndergaard says he knows his body better than anyone else and his is the final decision. He is right about one thing, it is his decision to make.

Let’s take sport out of this and look at it from a business perspective. Let’s imagine the company you work for thinks there is a medical problem and tells you to get treatment. It might well be in your best interest to visit the doctor but it’s still your decision whether or not to do so. That’s liberty. And, finally, we get to my point.

Syndergaard made a poor decision in not getting an MRI. He doesn’t, in fact, know his own body as well as physicians. The Mets have every right to be angry at Syndergaard for refusing medical treatment and the fact his next start was terrible indicates as much. All teams in the future should be aware that Syndergaard is in the habit of denying an injury. All contract negotiations should take this into account.
We are free to choose the course of action we desire, even when that decision is not in our own best interest. When a baseball team or corporation can make medical decisions for you, that is a totalitarian state. We don’t live in one of those.

Being free means being able to make bad decisions. We are not children being told when to go to bed. We are adults and that’s a good thing, even when we fail to take advantage of it properly.