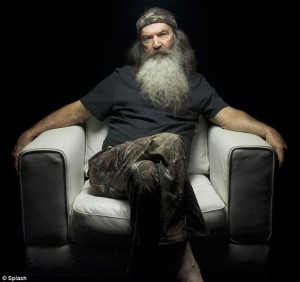 Thanks to my Facebook friends I just read an interesting story about Duck Dynasty star Phil Robertson.

Robertson examines the thought processes of a family who is brutally murdered, raped, and dismembered by a group of insane people. He does not mention a second family but the comparison is there, if not overtly mentioned. One family is an atheist family while the other is presumably Christian. Robertson thinks his story is about the world not having a right and a wrong without God, but surprisingly that’s not what it’s about at all.

The third and final level I find interesting is that the murdering, raping, and dismembering parties will have the rest of their lives to realize what they did was wrong and genuinely confess their sins. Then those people committing the murder, rape, dismemberment will get into heaven where they can presumably apologize to the family for all the murdering, raping, and dismembering and both groups can live together in eternal bliss.

Perhaps that’s even why God allowed all that murdering, raping, and dismembering in the first place. So that the person committing the atrocities would feel remorse and turn their life around. Thus the murdered, raped, and dismembered family will have served their purpose in the eyes of the Lord.

The poor atheists on the other hand will know that their murder, rape, and dismemberment was not part of God’s plans but just the actions of a group of insane people. Thus they will somehow suffer more.

What does this story really tell us? That Robertson, and anyone who agrees with him, are sick people.

2 thoughts on “Phil Robertson’s Story of Murder, Rape, and Dismemberment”