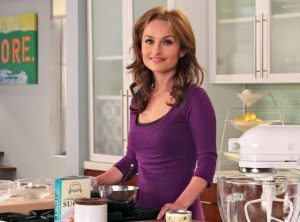 A celebrity chef by the name of Giada Di Laurentiis was recently quoted as saying she wishes she could tell strangers who approach her, please don’t get touchy-feely. According to the people who read this story, it means she is an elitist who thinks she is too good for regular folk. Really? Because she doesn’t like strangers coming up and grabbing, touching, and otherwise groping her?

Well, if Di Laurentiis is an elitist, I am also. I’m certainly not famous and there isn’t a line of people waiting to grab me and tell me how wonderful I am, but if there were, yuck. Di Laurentiis mentions that she wishes she could tell people not to get so forward but because of her celebrity status it is not possible.

I’m reminded of when I see a professional golfer transition from the green of one hole to the tee of the next while passing through a sea of people wanting to give her or him high-fives. Fans reaching out to pat the player. Again, yuck.

I also remember an incident at a Rams game I had a few years back where a drunk, slovenly, and rather disgusting person wanted to give me a high five. Yuck. Nope. I got called a rather vulgar name for refusing and I’m just a regular Tom. Imagine if I was a celebrity and I refused to touch the skin of the man who in all probability pissed all over his hand earlier in the day and didn’t do a good job of washing up. Am I an elitist because the thought of slapping hands with hundreds of people who have been doing who knows what all day skeeves me out?

The reality is that Di Laurentiis is correct in her assessment. If she refused to interact with her many fans she would anger some of them. I don’t get it. I don’t particularly want to touch a celebrity and I completely understand why Emily Blunt doesn’t want me to give her a hug. Darn it.

What surprises me is the rancor in the comments section. It’s a complete lack of self-awareness. I think the vast majority of people think exactly like Di Laurentiis feels. They would be completely freaked out if an endless line of strangers came up to them and insisted on hugging, patting, or otherwise touching them. They’d do it because they are celebrities but they wouldn’t like it.

The comments are also filled with people filled with self-congratulations because they claim not to like Di Laurentiis or find her unattractive. It seems to me if people who are not fans of hers and find her unattractive are commenting on a story about her, well, maybe they are fans. At least fans enough to know who she is and take the time to partially read a story about her.

To foray briefly into psychology, you might be tempted to post a hateful and angry comment on Social Media because you’re not particularly happy with your own life. You’re jealous of Di Laurentiis and by putting her down you give yourself the illusion you are better than her.
I’ll conclude with a question I ask in all honesty. Would you be freaked out if complete stranger rushed up to you and insisted on hugging