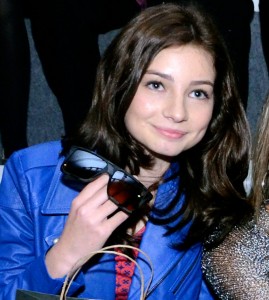 I’ve got nothing against a pretty girl in a bikini but when you paste a picture of a fifteen-year-old girl in a bikini on the front page of your site and claim it’s because you want to let the world know she’s doing fine then, well, ick.

That’s exactly what many media outlets did with a picture of Meadow Walker. In case you were worried about Walker, whose father Paul died in a horrific car wreck and who is now the subject of a nasty custody fight, well they want to let you know she’s just fine. Either that or they wanted to plaster a picture of a fifteen-year-old girl wearing a bikini on their front page hoping to get lots of clicks. You tell me.

Paul Walker was a star in the hit movies Fast and Furious and his death was big news. Following that there has been a nasty custody fight between Walker’s wife and his mother. Lots of news fueled by hungry clicks from people who relish in this sort of thing. Now we’ve got a picture of Meadow in a bikini. Well, if you’re a news outlet and you know how many men want to see pictures of young girls in bikinis and you can post one while pretending to be concerned for her mental state, win-win!

The world in general would like you to think it’s awful to look at girls that age with lust in your heart. They can’t just post pictures of various teenage celebrity daughters without a good reason or people would be up in arms. The reality is that men do like to look at well-shaped fifteen-year-old girls. They like to look at well shaped girls of just about any age. It’s really not such an awful thing to say, gosh, that young lady has a nice figure. She’s pleasing to look at.

Of course it’s another thing entirely for a man my age, or even thirty years younger, to try and get a date with such a young woman. Yet somehow it’s totally wrong of media outlets to post a picture of a pretty teenage girl if she isn’t somehow, however peripherally, making news. Everyone would scream about how they were posting pictures of underage girls online. However, once she’s in the news it’s apparently perfectly acceptable.

The only reason Meadow is on the cover is because she’s an attractive young girl and she’s wearing a bikini. You know it, I know it, and the media outlets know it.

I actually don’t mind the fact that they’re doing it for those reasons. Men like looking at pictures of this nature. It’s not an offensive picture. The bikini covers all the bits we’re not supposed to see. If the various outlets came out and said, “Look at Meadow Walker, she’s a hottie in a bikini”. I’d say a bit creepy but okay, it’s your show, she posted the picture on Instagram for all to see, whatever.

What really offends me, what makes my blood boil, is they’re trying to pretend they’re concerned for Meadow. That they just want to let us know she’s doing well. That’s a lie, pure and simple.

Am I overreacting? Do they really care about her? What do you think?