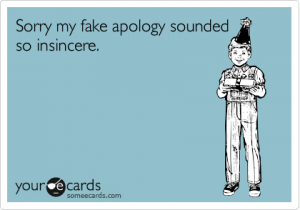 I was thinking about the idea of an apology. You say or do something you regret. You say you’re sorry. The natural reaction of the person or people you’ve offended or angered is to accept the apology. It is almost as if some part, if not all, of the original transgression never happened. But what is an apology? Just words. I’m beginning to become skeptical about accepting those words, they are merely a way for the person giving the apology to feel better. I’ve decided I don’t want apologies anymore, I want to see a change in your behavior. That’s a real apology. If that’s beyond you, fine. Let’s both move on.

I’m sure this is coming across as rather cruel and heartless and perhaps it is. It’s just that I often see people giving what appears to be heartfelt apologies for particular misbehaviors and then going right back to repeating the offending behavior in exactly the same fashion.

I’m sometimes willing to believe the apology is sincere. The person does feel bad about what she or he did. But the apology is nothing more than a symptom masking panacea. The offending person is fixed and can go on about their life without further worry, until they do it again. It’s an endless cycle of misbehavior and apology. There is no effort to fix the underlying problem, or perhaps there is an attempt but it ends in failure. The apology is a central part of the ongoing problem.

It seems to me, quite frequently the words are completely phony. The person is only apologizing because the behavior generated unfavorable results. The person isn’t really sorry at all. They are sorry about the consequences but they acted exactly in the fashion they desired. The only thing they’d change about the incident that requires an apology is the resulting upset.

However, if the person actually changes their behavior over the course of the next several years, that would seem to me to be a real apology. I’m sorry I did something and I recognize what I did was wrong. Every time I’m in a situation in which I could repeat the behavior, I react differently. That’s an apology I can get behind.

So, there you have it. If you offend me and aren’t sorry. That’s cool. Tell me you’re not sorry and I’ll deal with it. If you are sorry, change your behavior. If I offend you, tell me about it and I’ll try my best to change my behavior if I feel I was in the wrong. Apologies aren’t worthy of accepting or rejecting.

Sometimes I wonder why I don’t have a lot of friends, then I remember!

Have a wonderful day.