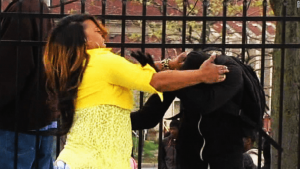 I’ve been thinking about the many troubles black people have had successfully integrating with society in the United States. It occurs to me that perhaps one of the primary causes for this problem is the rampant use of corporal punishment by black parents.

I am certainly aware that there are other issues. The legacy of slavery. Racism still exists. Driving while Black. This is not a one issue problem nor do I claim that I offer a comprehensive solution.

Does any of that sound like the story of black people in the United States?

There have been a number of cases in the news about using a switch or other implements to punish a child but the one that has been percolating in my mind for quite a while is the image of a woman repeatedly hitting her son as he joined protests in the street during the recent Baltimore riots. She was largely applauded for her efforts to raise her son right although more than a few people pointed out that she was merely teaching violence to violent rioters in order for them to be less violent. Yeah, not going to work.

When young black men are stopped and questioned by the police the argument is that they shouldn’t react violently because that just escalates the situation. Those who read my blog should be well aware that I have no sympathy for violent law enforcement officers who target young black men and escalate the violence. I certainly do not deny that police often profile young black men. Driving while black is no myth. The criminal justice system treats black inherently unfairly as can be seen in any study of punishment dolled out for similar offenses to whites and black. As can be seen in any study of the racial predominance of pullovers which are based on minor traffic infringements.

That being said, there is absolute truth to the argument that if you are polite to an officer who is doing his or her job the odds of it escalating into something terrible decrease dramatically. The majority of officers are out there doing a difficult job as best they can and should be treated with respect. Unfortunately, those raised in a violent home all too quickly resort to violence themselves.

So I say to all parents, stop hitting your kids but I say it especially to black parents. It’s my opinion this sort of violence is one of the major contributors to the difficulties black have faced in successfully integrating with society.

A new generation of young black men and women who learned to resolve conflict without violence will go a long way to establishing the fully integrated society that most of us strongly desire. I myself am a Libertarian and am convinced the merit of a person is in their actions; not the color of their skin, their race, their sexual identity, their religion, or any of the other ways people are pigeonholed.