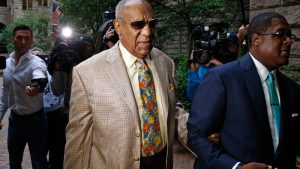 The Bill Cosby sexual assault case is in full swing and I think it brings into amazing clarity the terrible position people find themselves in when they are sexually assaulted or serially harassed. On the witness stand and in the court of public opinion, the people who come forward with these accusations almost universally face vicious attack from the supporters of the accused, particularly when the suspects are celebrities.

In the Cosby case, the first woman to take the stand is being accused of all sorts of things by the defense attorneys. We see this same scenario play out again and again, most recently against people who accused Bill O’Reilly of misdeeds.

The attacks against the alleged victim are vicious to the extreme and it makes me wonder why anyone would come forward rather than taking a large monetary settlement. I think that’s why most victims of such crimes suffer in silence and why attackers get away with their behavior year after year. Some victims attempt to come forward and are squashed by their powerful attackers. Some come forward and pursue the case as best they can. Proving these attacks is not so easy. Many fail to have enough evidence to support a conviction.

In a court of law, we must have evidence and in these situations, it is generally the word of one person against the other. The need for this burden of proof is important and necessary. We cannot deny some people make false accusations. We cannot presume the accused is guilty. That is one of the factors making coming forward all the more difficult.

There are no easy answers to these sorts of situation nor is there any chance they will stop occurring. People in power unfortunately will sometimes abuse that power, that is an unhappy fact. Victims of such attacks have two initial options. They can go on with their lives and ignore the event happened. This is certainly the easy course. A terrible thing has been done but there is no chance to undo it. Bringing it to light will potentially harm the person accused but it might well not, and the accusers own reputation can be destroyed.

If the victim pursues the case there are again two possible outcomes. The accused can offer some sort of financial settlement or the case can proceed to criminal charges. Again, it seems to me the path of least resistance is to simply take the money and move on with your life. Pursuing a criminal case is going to take considerable time, money, and effort and there are no assurances of a positive outcome. The accuser can easily lose the case.

What’s the point of all this? I just hope to make these facts apparent to everyone negatively judging those who take money as settlements or those who go on about their lives without bringing charges.  The victims are doing what most of us would do and what is, frankly, sometimes the best course of action. Unfortunate as that may be.

Our court system protects criminals, particularly when it is the word of one person against another. I’m not saying this is a bad system, in fact I’m a firm believer in our legal doctrine, but I am suggesting in these sorts of cases it makes the decision to pursue criminal charges a difficult one.

Don’t be quick to leap to conclusions after finding out a person didn’t file charges immediately after the incident.