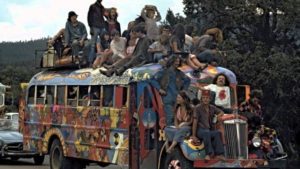 Lately a lot of unicorns and rainbows have shown up in various places around the internet and in the physical world. We see Unicorn Frappuccino at Starbucks, rainbow sneakers from Nike, and many other combinations of the two just about everywhere you look.

There is nothing wrong with unicorns or rainbows. Anyone who takes delight in adorning themselves, gulping down, or otherwise enjoying colorful and single horned things is perfectly fine. What happens is that some people; contrarians, skeptics, whatever you want to call them, are willing to challenge things just for the sheer enjoyment of testing the normal. Some people get sick of seeing popular trends and lash out with things like Goth ice cream. Good for them!

I must admit a strong tendency to cut off my nose to spite my face. What this indicates is someone who behaves in self-destructive ways in an overreaction to something else.

It is in the very nature of rebellion to ultimately defeat the enemy. Eventually Goth ice cream might well become the normal and then people will rebel against it, perhaps even the same people who are currently promoting it as they fight against the rainbow and unicorn trend.

All of this is a good and natural thing. It is part of human nature to want to rebel against the standards of the time. While some people enjoy marching to the beat of a particular drum, there will always be others who refuse. The only way to completely stamp out such counterculture is with a totalitarian government. Counterculture is what authoritarians fear the most, they attempt to arrest, imprison, and execute anyone who dares speak out against their way of life.

When people are free to sell Goth ice cream on every corner it means we are free to do largely as we desire. People like to compare things to the Nazi regime in Germany and it’s not always valid. But to give you an example of a real totalitarian state; when you called the operator in Nazi Germany to give them a phone number, it was required you say D as in Dora, not D as in David. So, don’t underestimate Goth ice cream, my friends.

The ability to do as we please without interference from the government is important. Remember that right now people are trying to pass laws about what you can wear, what music you can listen to, what items you can purchase, what chemicals you can put in your body. Each time we pass laws limiting the ability of people to freely express themselves, to do as they please, we make the world a less wonderful place.

In conclusion, Goth ice cream is a beautiful thing.