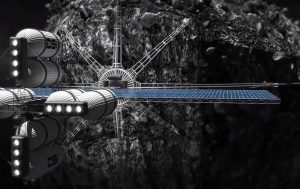 What does asteroid mining and flooding the world’s supply of precious metals mean economically? What would that mean for the world and for you?

For many people the idea of mining asteroids is the stuff of science fiction. Most people roll their eyes at me when I talk about our ability to make this fantasy a reality.

I’m here to tell you, asteroid mining is not far away. There are a number of ideas on how to accomplish it, but one of the easiest is simply changing the velocity of small asteroids so they enter into Earth’s orbit. From there break them down aboard a space platform and drop the material to the surface.

Getting the mining platform built would be a task but once it was done there would be an endless series of asteroids floating gently in to be processed. Asteroids as small as ten meters across generally contain more than one-hundred pounds of gold and seven-hundred tons of other useful metals. Larger and more metal rich asteroids have far more. To put this in perspective; the total amount of gold mined from our planet is about 152,000 tons.

When asteroid mining becomes a reality, there are economic issues to consider. We often consider things precious, or valuable, simply because they are scarce; not because of their value in industry. Platinum is scarce and used in industry primarily for emission control on vehicles. It’s very possible that we will not need catalytic converters on modern cars. At that point, the value of platinum is reduced dramatically. Couple this with the fact an asteroid as small as one kilometer in size might be mined for more platinum than currently exists on Earth. Suddenly platinum is all but valueless.

Gold certainly has value in industry but also largely for artistic endeavors. The things we consider valuable today will be super-abundant tomorrow, and thus have little value. This has happened before. There was time when aluminum was more valuable than gold. Aluminum has incredible value in the industrial world. Luckily it is readily available on Earth so scarcity is not an issue, although I’m guessing it will be a target of asteroid mining as well.

Basically gold, platinum, silver, and other metals we associate with monetary policies will become super-abundant. This means every person who invested in such metals will lose their money. This also infers that any country basing their economic system on precious metals will instantly become bankrupt. Their savings will be worthless as the price of gold plummets.

The economics of the world are changing and it’s wise to be prepared for such events. Gold, platinum, silver, nickel, cobalt, rhodium, and other rare and useful metals aren’t going to be readily available immediately, but there is no doubt in my mind they will eventually become so.

Someday there will be mining bases embedded in the asteroid belt that will ship billions of tons of useful elements to Earth for processing. Scarcity is no longer an issue.

I’m not saying sell all your gold and platinum today. I am saying, if you’re a gold bug or hung up on precious metals, you need to consider what’s happening in the world and off it, and plan your future accordingly.