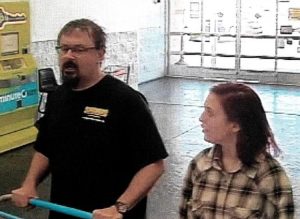 Yes, I’m saying runaway rather than Tad Cummins kidnap victim. I’ve waited to comment on this story because it seemed like there was more to it than we original knew, and now we find out the girl’s mother was a serial abuser. The girl was fleeing a terrible situation.

I’m not excusing Cummins for his behavior. He is the adult and he should never have allowed the situation with the girl to become so personal and certainly not intimate. He deserves what he has coming to him. That being said, the girl was fleeing a terrible situation with the one person who showed her any kindness. If this had occurred three years into the future, when she was eighteen, things would likely have turned out differently.

It doesn’t take much imagination to believe she might have been better off with Cummins. Again, I’ll state for a second time to head off the criticism I know is headed my way, Cummins was way out of line. He failed as a teacher, as an adult, and as someone who was trying to help the girl.

That being said, I think it’s clear they were love. The girl was one of ten children, all who apparently suffered horrific physical and likely mental abuse from their mother. The father left the situation about a year and a half ago and took custody of the children. It’s likely the abuse didn’t suddenly start in 2014 when it was first reported. It’s probable the girl and her siblings suffered from decades of abuse.

The girl was subject to serious physical abuse and looking for a way out. She found it in Cummins. It’s not completely impossible to rule out the idea that she was the instigator in all of this, although this certainly does not excuse his behavior. He had other options. He could have arranged for the girl to get away from the abuse and then waited the three years required for them to be together. He chose not to do that.

It all comes back to child abuse. If the girl’s mother hadn’t brutally beaten her children, if the girl’s father hadn’t sat back and watched it for years before finally leaving, if the state was allowed to take the children away; it’s likely none of this would have happened. It’s also quite probable the girl’s mother was abused herself as a child.

There aren’t easy answers to all of this. It’s not easy for the state to take children away from their parents and that’s a good thing. I think parents should have a fairly large amount of leeway in how they choose to raise their children.

The next question is what to do now? As it stands, what will happen is the girl will likely be returned to her father, which may or may not solve the abuse problem. Cummins will go to jail. Will the girl be better off with her father than with Cummins? Is Cummins a threat to general society? Is the father part of the abuse? I don’t know the answers and that’s unpleasant. There might not be a good solution.

The length of time this story captivated the public proves how much cases like this fascinate us.

I don’t have any great revelations or epiphanies about this situation. It would be nice if there weren’t people abusing children out there.