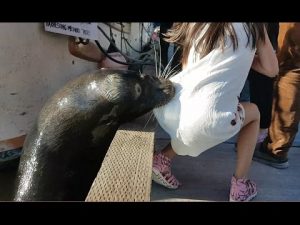 There was a big Social Media story about a young girl who was pulled by a sea lion into Steveston Fisherman’s Wharf in Vancouver. In response, the region is now crowded with visitors, many with children in tow, likely hoping to see something similar. Are you shocked? Apparently much of the internet finds those visitors to be rather stupid. Commenters are filling up the stories with diatribes about how unwise are these people.

Really? You’re shocked people flock to the site of such an incident? You’re patting yourself on the back because you’re so much smarter than them? Ha! I absolutely guarantee most of the people making these comments would be lined up on the wharf with camera in hand if they lived in the region.

Heck, if I lived in the area I’d probably go myself. It’s an interesting story and I’d take a picture with my non-existent child leaning over the railing, and send it to all my friends. I hate crowds, introvert is me, so that would be a discouraging factor but if given the opportunity I can’t deny my natural curiosity. That’s what is going on, natural human behavior. I’d be shocked if there weren’t thousands of people with their children at the wharf.

And, as long as we’re talking about human nature, this need to congratulate ourselves because we know we wouldn’t be as stupid as all those other people certainly fits the same pattern. It seems to be an irresistible compulsion to spend a great deal of time and effort trying to convince ourselves we’re better than everyone else. We’re smart and they are stupid. I’d never do all those silly things. The internet gives us the means and opportunity to do so at an unprecedented level.

I like to consider myself a fairly intelligent fellow but I fall into the same patterns as everyone else. When I pass an accident on the road, I rail against all the idiots rubbernecking but then do exactly the same thing as I go by. I like to think I’m a bit smarter about it and keep my eye on the road more than most, but the temptation to see what caused the accident and the result therein overwhelms human sensibilities.

The fact we fall into predictable behaviors is something advertisers, lobbyists, and others use to manipulate us into doing what they want. It’s good to be aware of human nature so you can be cautious of those trying such maneuvers. If you pretend you are not subject to the same failings as everyone else, you are tempted to believe you wouldn’t be taking pictures at Steveston Wharf. You would, trust me.