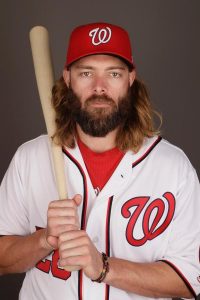 Former Major League Baseball Jayson Werth claims baseball is being ruined by hard-core statisticians he calls Super Nerds. The basic idea behind Werth’s claim is that advanced statistical analysis, Sabermetrics, have changed the way the game is played with home runs becoming more valuable and thus increasing strike outs. Certainly, it’s more complicated than this quick explanation but what I’d like to examine is the general idea that statistical analysis is causing harm to the game of baseball.

Sabermetrics came to the forefront of baseball decision making when Billy Beane incorporated the ideas of Paul DePodesta into the day to day operations of the Oakland Athletics. The movie Moneyball was based on these events. The Athletics were very successful with these techniques and soon the Boston Red Sox incorporated them and won the World Series. Not long after this most teams embraced the ideas of the so-called Super Nerds.

The idea is that men and women with advanced understanding of statistics make better baseball decisions than the people who have played the game for their entire lives. It’s no wonder people like Werth and Goose Gossage have come out with scathing comments about the change in baseball and the generation of largely Ivy League educated men who brought about those new methods.

The proof is in the pudding. The methods employed by the Super Nerds work. Sport is a result orientated business and if ideas are failing they are generally discarded. That doesn’t really address the claims Werth is making. He isn’t saying the Super Nerds are making bad decisions that hurt teams, he’s saying they are making the game boring, something no one wants to watch.

I suspect he’s making that claim because attendance is down this year by about 6% although major weather factors early in the season account for much of this. Over the last twenty years attendance statistics are relatively flat with about as many people, 72-73 million, attending games each season. It’s neither up or down. This seems to put Werth’s statements to question.

I strongly suspect great athletes like Werth feel their territory is being usurped by statistically minded men and women with advanced degrees and no experience with the game of baseball. I can understand that attitude. It seems fairly normal to resent newcomers telling you how to do your job.

The evidence suggests the new methods are superior in producing winning teams and have not had any effect on attendance as a whole.

One thing I’ve learned in life is that nothing stays the same. If baseball has changed to focus more on home runs, that will alter the underlying statistical base and a new metric will eventually be adopted to counter the trend.

The lesson, if there is one, is that change is inevitable, like it or not.