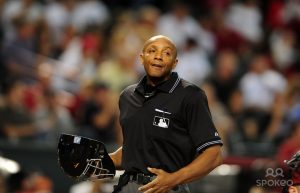 There’s a lot of uproar in baseball over an umpire named C.B. Bucknor who has a long history of making terrible calls and he hasn’t disappointed this season. What I’d like to discuss is the idea that no matter what sort of job you perform, someone is the worst at it. When is it time to give up and let go of that person?

Let’s accept the idea that Bucknor is the absolute worst at his job in the Major Leagues. Why hasn’t he been replaced? Should he be replaced?

It’s not as easy a question to answer as you might imagine. The first thing you have to evaluate is if there is someone better that can step in and do the job. This is not always apparent but must be determined. If you put someone even worse than Bucknor in his place, you certainly haven’t solved the problem.

The second question to ask yourself is what sort of potential for improvement is there with Bucknor? I think it goes without saying that someone new to a job won’t have as much skill as another person with much more experience. That someone with little training won’t do a job as well as someone who spent a lot of time practicing. We don’t want to fire people immediately without evaluating their potential.

The next thing to take into account is something called loyalty. I know that sounds strange, but it’s actually an important consideration. Has Bucknor performed better in the past? Has he been loyal to us? If the answer is yes, then it is often times a good thing to return such loyalty.

The rest of your employees will see this loyalty and return it down the road should you make a mistake. If you simply fire a loyal employee at their first mistake, future employees certainly take this into account. Would you want to work for someone who shows no loyalty? Being disloyal reduces your pool of eligible candidates.

There is also the idea of creating an environment of fear. If the league fires umpires after a few mistakes, that creates such a workplace. This not a healthy place to work. If you are afraid of making mistakes, rather than simply doing your job, you are much more likely to err.

Finally, you must consider contracts. You cannot break such binding legal documents. If the employee has a contract through their union or other agent, then you must gather the proper evidence in order to fire that person. Otherwise you risk legal issues.

Now, don’t get me wrong. I think Bucknor has proven his incompetence for long enough that a young umpire should be brought in as a replacement. I’m certain I don’t know all the answers to the questions I’ve posed above, but I think it’s high time Bucknor was sent on his way.

It’s easy to see an egregious error, or multiple such mistakes, and demand a firing. We sports fans are notoriously quick to call for replacements in such situations.

Before you do, just take a moment to think about all the reasons why Bucknor might still have a job.