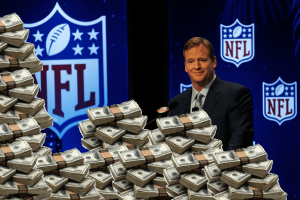 I’m a Libertarian and there is not much about socialism I find enticing as a political philosophy. I also like football. Finally, I’m a realist. Sports organizations exist today almost completely as a conglomerate of policies that can only be described as socialistic and communistic.

Drafts are one of the most anti-capitalistic entities that exist in the western world. Imagine if young college students were drafted upon graduation by a particular corporate entity, their salary was predetermined by some equation, and they were unable to negotiate with anyone else. Should they choose not to sign with the company that drafted them, they could not sell their skills elsewhere for one full year, upon conclusion of which they were back in the same situation, hoping to be drafted by a company for whom they wanted to work. Yikes.

The process young high school students endure is slightly better. They can at least choose which college to whom they sell their services. However, once that letter of commitment is signed, it’s a different story. They are largely stuck. If they want to leave, their boss must approve of the school they transfer to and even then, they must sit out for a full year. And, of course, they can’t negotiate their salary.

Everyone on the team earns exactly the same amount. From the star quarterback to the third string strong safety, not that I’m picking on safeties, they all get room, board, and tuition. That, dear readers, is communism.

The amount of money each team in the NFL, NBA, and NHL is allowed to spend on salary is strictly controlled by rules. No one can spend as much as they want, each team is limited to the same value. This means each player gets remunerated at a rate that fits into a predetermined structure rather than a fully capitalistic system.

A portion of the total amount of money each team earns over the course of the season is subject to division and split among all the teams in the league equally.

Can you imagine such a system anywhere except sports? The thought is horrifying, but we accept it without thought when it comes to the various leagues. The structure is different from league to league but it is fairly similar from one to the next.

The alternative is to treat athletes like everyone else. Every school and team can offer whatever incentives they want to each player. You’re a star eight-grade basketball player? Perhaps a top school in another state wants you. Maybe they’ll move your family to a nearby home and pay you. How is that bad for the athlete?

At the end of the college season each player is free to negotiate with every professional team and arrive at a contract that is acceptable to all parties. How can that be bad for the players?

Yes, the wealthy high schools, colleges, and professional teams will get all the best athletes. That’s how a business succeeds in this world, they get the most talented players.

We must consider personal gain as well. The second-best running back would almost certainly sign with a different team than the best running back for the opportunity to play more. Teams would have to manage their expenditures within their economic means.

I have no illusions that such a system will ever be implemented for athletics across the country. I don’t deny that almost everyone reading this will call me an idiot, and they won’t hesitate to tell me why. However, in addition to being a Libertarian, I’m a dreamer. Maybe one day we’ll have a system designed to benefit the individual. That’s my dream at least.