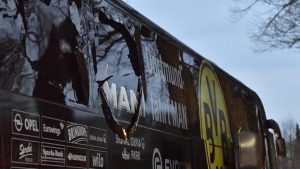 It wasn’t a sports fan. Go figure. The desire for money rather than sporting ideology drove an investor to attack the Borussia Dortmund football club’s bus as they were driving to a match with Monaco in what is called the Champion’s League.

The bomber attempted to misdirect authorities by leaving terrorist-like notes in the hopes that Islamic radicals would be implicated in the attack. Instead it was merely an investor who hoped publicly traded shares of the team would drop after he purchased a large number of options. Had the shares gone down, he would have realized a large profit.

All of this is reprehensible, but I’d like to take a moment to discuss why this sort of thing hasn’t happened to sports teams or players in the past.

Why don’t fans attack athletes of opposing teams? Why don’t they attack the team bus? Why hasn’t some crazed Chicago Cubs fan attacked players for the St. Louis Cardinals? Or vice-versa?

I’m of the opinion it’s inherent in the very nature of sport. Sport is better than religion, better than politics, better than wealth. People kill and maim each other in the name of these things all the time. But they don’t when it comes to sporting events. Yes, fans fight one another, but the athletes are left alone.

It’s no coincidence that sport is about as close to an example of a Libertarian Utopia as we have in this world. The better athlete plays. The better team wins. If you are good at kicking the ball; it doesn’t matter what you look like, what your politics, what god you worship, your gender, your age, the color of your skin, your nationality, or any of the other superficial things that falsely divide us.

I may hate the Cubs, really, when you think about it, everyone should. I certainly agonize when my beloved Cardinals lose. I rage against the other team and their misguided fans. I’m equally certain such fans feel the same way about me. But no one does the obvious and violently attacks the star players of other teams.

In an open system where everyone is allowed to compete fairly, frustration does not arrive at the fever pitch of violence. In politics, particularly in repressive regimes, there is a sense of hopelessness. In sport, anyone can win. It’s just a matter of managing your team and the game properly.

The reason the Cubs won the World Series is because they built a better team. They played better baseball. There is nothing to prevent the Cardinals from doing the same. I have no need to resort to violence.

If we had a world where the best individuals and businesses succeeded without interference, I think we’d see the same deficiency of violence prevail. Wouldn’t that be nice.