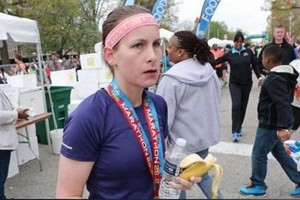 I have several friends who run marathons and specifically St. Louis area marathons so when I saw a story about how a woman cheated to win this year’s GO! St. Louis Marathon I was intrigued.

The story gets even worse because the woman, Kendall Schler, apparently successfully cheated to finish third in last year’s race. When she won this year a more thorough investigation was performed and it was determined that she did not run in the race at all. She simply jumped in right before the finish, reminiscent of Rosie Ruiz in the 1980 Boston Marathon.

At first I thought it was a rather amusing story because her attempt to cheat was relatively laughable in that she tampered with electronic tracking equipment but when I learned that she managed to pull off the trickery the previous year and I got a little upset. I’m not going to try and analyze why Schler cheated. I play online chess and cheating is epidemic in that milieu. People cheat for reasons that seem bizarre to me but they still do it.

What I want to analyze today is the overall anti-Libertarian effect that cheating incurs and how a society of Libertarians would deal with such things. The thing about being a Libertarian is that you largely believe people should succeed through their legitimate efforts. When one person cheats to get ahead that not only subverts society by putting a lesser qualified person into a position of power but also denies more highly qualified people at every level.

Let’s imagine we Libertarians have taken over the world. We have in place a society where achievement is the highest goal and the majority of people simply do their best at everything they attempt. How do we deal with people like Schler? In a Libertarian society there might not be electronic tracking in race bibs because we assume people will not cheat. How do we safeguard our society from such as Schler without becoming the authoritarian state we so detest?

It’s not an easy question to answer. In my opinion we actually must allow Schler to win. Our suspicions aroused, we (all the other racers and officials) now watch her more closely next time. When we try to create rule after rule to safeguard against Schler and her ilk we end up creating a system designed to thwart cheaters rather than promote achievers. Sure, Schler gets the win but does she benefit in the long run in a Libertarian society. My answer is no. She is quickly discovered and shunned.

However, in a non-Libertarian society with millions of rules the cheaters, provided they are stealthy enough, can prosper, as did Schler last year. No one watches too closely because they assume officials and existing rules will eliminate cheaters. Meanwhile the cheaters know the rules and use various methods to skirt them. How many cheaters are out there right now, unbeknownst to the rule makers?

It’s a tough question and the Libertarian answer is not easy to digest and understand. Still, I think it’s the right answer for society and for the world.

One thought on “Cheating to Win – Kendall Schler at the St. Louis Marathon”