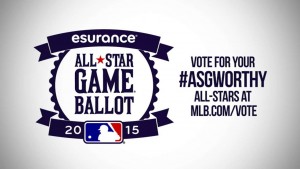 I just read a rather stupid article from Big League Stew about how the All-Star game balloting displayed a “Midwest Bias” because the Kansas City Royals and St. Louis Cardinal had four and two players voted in as starters.

The Cardinals and Royals have the two best records in baseball and you would expect them to have more starters on the All-Star team than anyone else although four is inordinately high and voting issues in Kansas City have been in the news for a while now. The idea of a Midwest Bias is rather laughable simply because the starters for the game are determined by a democratic vote. No one picks the teams and therefore the only bias is that of the ballot box. Larger fan bases usually generate more winners.

That being said I did want to examine the idea of how the All-Star game balloting has regrettable similarities to how we choose the men and women who will make up the government of the United States.

If one group of people, call them fans of a team or a Special Interest Group, manages to get more organized than another they can sweep the ballot away from those who vote more on the basis of their integrity. By grouping their power and voting as a bloc they overwhelm individual voters and skew the ballot toward their candidate.

The result of this is that other groups must likewise organize themselves into entrenched voting blocs in order to win. They can’t vote for deserving players and a sprinkling of their hometown heroes when fans in other cities are voting en mass for their team’s players. This splits the vote and the organized group then wins.

There is also the issue in that the All-Star balloting system usually ensures at least one or two formerly great players who are not having a particularly good season are voted in on their name recognition whereas lesser known players, only known to hometown fans, lose out.

The end result is that we often have players in the All-Star game who are clearly not deserving of their places while those who rightly should get a spot do not. This is one reason pitchers and reserves are exempt from the voting process. The managers of the teams pick their own players to fill these spots although this often leads to controversy as well. Managers sometimes overlook deserving players in order to place their own favorites on the team. That is a good example of bias, unlike the silly article.

What have we learned? Popular voting leads to undeserving candidates winning. Popular vote leads to divisive pack voting, which in order to win you must use an “all or nothing” strategy.

Welcome to how we choose our Congress and President. Of course in baseball, at least, there are thirty teams. In politics we largely only have two teams and they actively prevent anyone else from playing the game.

Is there a better way?