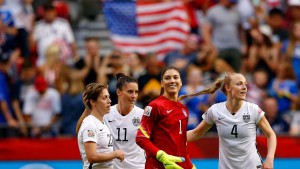 Hope Solo is a Bad Person

She’s a bad person. Hope Solo was not born a bad person. I think what happened in her childhood shaped her into being bad, but in the end I just couldn’t bring myself to root for her or the team that ignored her transgressions because she’s good at being a soccer goalie.

I don’t want to cover why she’s a bad person. There are plenty of articles out there that discuss it at length. I hope she gets counseling and can avoid situations like this in the future.

Not Rooting for Team USA

As the USA women’s World Cup team continued to advance and I watched friend after friend post how excited they were on Facebook, my own enthusiasm refused to emerge. I just couldn’t find it in me to root for the team that so eagerly overlooked what she had done simply because she gave them a better chance to win.

The reality is that if Solo had been a bench warmer, a marginal player, then she would never have been allowed to play. Her transgressions were such that she would have been left off the team. Of this I have no doubt. And that’s why I just couldn’t be all that happy when Team USA won the World Cup in resounding fashion.

There are a lot of great stories from the triumph. Hat tricks, veterans going out with victories, national pride. But I wasn’t rooting for them. I’m not happy they won.

Winning is not Everything

It’s my opinion this World Cup win is really just a terrible loss for ethics, for morality, for human decency.

I sure wish they would have left Solo off the team. That would have been a real victory, win or lose.

I know my opinion here isn’t going to be popular but I can’t force myself to feel differently.