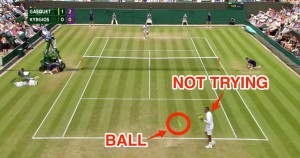 It’s time to put on white and play tennis at the All England Lawn Tennis and Croquet Club! This year a fellow named Nick Kyrgios stopped trying for a game because he was angry at the umpire’s decision in the previous game.

For those fans of mine who are not tennis enthusiasts I’ll let you in a secret. Tennis players stop trying, or “tank”, games all the time. The way tennis is scored with sets makes it useful for players to stop trying for a bit to recover their strength when the chances of winning a set or even a game is remote. Say a player is down 5-0 in a set. There’s not a lot of sense in going all out to win a game when coming back to win the set is all but impossible.

Wimbledon, in particular, facilitates this sort of behavior because the extremely fast surface gives the serving player a major advantage. Thus a returning player, like Kyrgios in this case, sometimes makes little attempt to win.

That being said, Krygios’ effort was far worse than normal for a player “tanking” a game. Generally there is at least a half-hearted try to return the ball in the hopes your opponent messes up. In this case Krygios made almost no effort at all. It was clear what he was doing. His opponent was ahead 2-0 in the second set so it had not reached an insurmountable lead as of yet. He ended up losing that set 6-1.

Krygios then started playing with more intent and won the third set before losing the match in the fourth. He played hard for both of those sets.

The question being asked is if Krygios “cheated” fans out of their money by not playing hard, or even at all, in that one game.

There is no doubt that athletes take plays off at times in all sports. They realize the energy necessary is not worth the result to be gained. They “tank”. What makes this case so different is the absolute indifference showed by Krygios. Fans booed, as would have I.

I do think Krygios’ behavior was very poor. It was disrespectful to the audience, his opponent, the officials, and the game itself. That being said, he did what they all do, just a lot more obviously.

I certainly prefer watching a player who gives it their all rather than one who slacks off during the game, even if for tactical reasons rather than simple petulance.

But to the question. Were the fans cheated?

I say no. One game or even set does not rise to that level if the other games and sets were played hard. I can see people disagreeing with me and I understand their point of view. It’s an interesting line. If he tanked two sets is that cheating? Certainly everyone would agree that if he lost three straight sets without trying that was indeed cheating the audience.