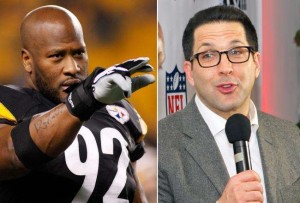 There were a number of tragic stories about misuse of fireworks over the Independence Day weekend and one of them involved a football player for the New York Giants named Jason Pierre-Paul.

A football analyst named Adam Shefter regularly posts scoops when it comes to the NFL and sports in general. He is the one who first reported that Pierre-Paul had his finger amputated and included an apparent picture of the medical records proving it happened.

Hello Health Insurance Portability and Accountability Act (HIPAA). At this stage were not sure how Shefter obtained the image but a retired football player by the name of James Harrison had a choice tweet about the incident.

James, I’m in agreement with you, buddy.

I’m not a lawyer but I’m guessing that Shefter is not in violation of HIPAA because he is not an agency that has medical records. Whoever gave him that picture could be in a whole heap of trouble. That being said, I’m am firmly of the opinion that what Shefter did was reprehensible, vile. Shefter works for ESPN and I’d be willing to bet suspensions are coming and those right quick.

The underlying problem, besides Shefter complete lack of moral fiber, is the news hungry world in which we live. The most important thing is to break the story first and get all those clicks. Clicks mean money in a very real way. Shefter is under a huge amount of pressure from his employer to get the story. That’s how he makes a living and that’s how ESPN stays in business. Virtually every media outlet in the world now puts speed and sensationalism ahead of getting it right.

Before we blame the journalists for everything we must accept our own responsibility in the matter. We are the clickers. We created this environment, they are just feeding us.

Not that I’m suggesting a big suspension isn’t in order. I’m just saying this is the nature of the world we have created. If you don’t like it, your only recourse is to practice a little click control. I’m not holding my breath.