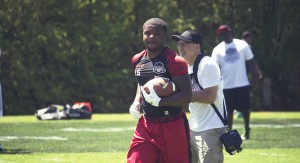 I’ve found an interesting story in the world of sports that I think illustrates one of the issues with college football as it currently exists. A highly recruited young player from Michigan named Mike Weber chose to go to school and perform as a running back at The Ohio State University.

The coach who was primarily involved in recruiting Weber just took a new job for the Chicago Bears in the National Football League (NFL) and Weber now feels betrayed. He thinks the coach, Stan Drayton, knew all along he was leaving the job.

Before we fully understand whether what Drayton did was wrong we have to understand how college football operates. Each year the coaches seek to bring in the most talented young players from all over the country and this process is called recruiting. The schools are not allowed to pay the athletes so they do this recruiting by promising the player certain things. Playing time and coaches who will develop them for the NFL and an eventual payday among other things. They show off their facilities and promise the parents of the recruit how they will take care of their boy. They build relationships with the high schools so that the high school coach will advise the young players to go to their college.

What’s important is that once a player signs a contract, commits in the vernacular of the NCAA, they are bound to that school. They cannot change their mind once what is called the Signing Day passes. This is a legally binding contract. If the player wants to change schools they must sit out an entire season, they can never play for another school in the same conference, and the coach of the original school has veto power over what other school the young player attends even after sitting out a year.

The coach, on the other hand, can leave at any time for a higher paying job without any repercussions. That in itself is obviously not equitable.

In this case Drayton announced that he was moving almost immediately after the all important signing day. After Weber was legally obligated to stay at Ohio State.

I’m not decrying Drayton’s move. Changing jobs is a tricky business and you don’t know if you are going to be hired for the new position or not. It’s reasonable that you don’t announce it before it is a done deal. That being said I’m absolutely certain the Chicago Bears and Drayton intentionally timed this announcement to come after Signing Day. The NFL understands their players largely come from colleges and the teams of the NFL want to behave in such manner as to keep the colleges happy. This means announcing that they have signed college coaches after Signing Day when possible.

What upsets me is that Weber is bound in a way that Drayton is not. The circumstances have changed enough that I think players like Weber should be allowed to change their mind. Frankly, I think Weber should be allowed to change his mind any time his contract has expired. Players essentially work on one year contracts, called scholarships. The school pays for tuition for a year and if they decide the player is worth such payment they renew the contract at the end of the season.

Weber should be able to pack his bags and go off to whatever school desires his services. In this case The Ohio State has no damages. They paid for no tuition, no room and board, and no coaching. Weber should be allowed to leave. The NCAA doesn’t want this because it would likely become somewhat chaotic as players backed out of contracts because of changing circumstance. However, the teams are allowed to do this. If a player, for whatever reason, is deemed undesirable the school simply doesn’t offer them a scholarship the next year. This happens all the time. The player is injured or new recruits push the player deep onto the depth chart and the school needs to free up a scholarship. It’s the nature of the business.

I think it’s unfair that players do not have the same freedom.

In reality coaches are not even bound by their contracts. The coach buys out their existing contract and moves on. Any coach, even if under contract for five years, can simply leave. Generally the new employer pays some compensation for the move but not always. By this logic a player should be able to pick up and leave for another school at halftime of the game if they reimburse the school for the remainder of their tuition and sundry other expenses.

I don’t begrudge coaches here, I’m angry about the fact that there are clearly two sets of rules of conduct and the people who are getting the short end of the situation are the young players.