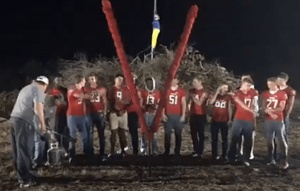 Van High School in Texas conducts an annual homecoming ceremony, the Vandal Bonfire, in which a straw figure wearing the jersey number of the star player from their rival school is burned in effigy atop it. This year photos and videos of the Vandal Bonfire showed a figure wearing jersey number 8. This happens to be a black athlete from rival Brownsboro High. Outrage ensued.

A statement from the district explained the ritual has been going on since the 1940s with a brief pause after some students were injured a few years back. The tradition of the Vandal Bonfire is to have the best player from the opposing team atop it in effigy. The district statement promised in the future it would no longer have such a figure at the top of the bonfire.

It’s an interesting situation in that, if anything, the Vandal Bonfire is actually honoring the opposing player rather than denigrating him. However, burning in effigy is an act often associated with anger at the person being so represented. This combined with a racist history in this nation of lynching and burning crosses stirs strong emotions in many.

It’s my opinion the school district can do whatever it wants in this case. I don’t think the display was racist in any way although I’d like to hear the opinion of the player burned in effigy at the Vandal Bonfire. The very act of burning someone atop a bonfire does strike a nasty chord and I’m glad the district has found a way to move forward with the tradition while eliminating what is something a reasonable person might find distasteful.

Another solution might be to invite the opposing player to the event and allow him or her to set the bonfire ablaze. In many ways it seems we are intent upon finding ways to divide people when, in my opinion, we should be striving for the opposite. We have far more in common with one another than we imagine and getting people together in social settings to learn about these things is something to be encouraged.

It is clear the football players and fans for both teams have many common interests but happen to go to, or root for, different schools. If they were to get to know one another they could play the game and, when finished, possibly enjoy a lifetime of friendship they might not otherwise have enjoyed.

2 thoughts on “Is the Vandal Bonfire burning in Effigy a Racist Attack?”