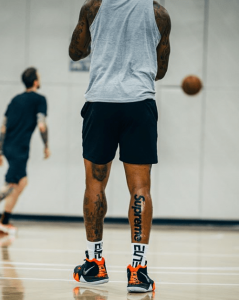 A fascinating story involving basketball player JR Smith, his new tattoo, and the National Basketball Association is making the rounds on various news sites this morning. Smith got a tattoo on his leg depicting the company logo for an apparel company in New York called Supreme. The league has a rule against players displaying company logos on their body or shaved into their hair.

I have several problems with this rule. In the first place I think a player should be able to put whatever they want on their body and the league should have no say in the matter. I go as far as saying if an athlete wanted a swastika, a racist term, a misogynistic image, or anything else offensive on their body, that’s their business. Now, a particular team has every right not to sign such a player, that’s the team’s freedom to decide.

My second problem is the rank hypocrisy of the rule. The NBA makes an enormous amount of money through its various endorsement contracts. The Nike logo currently appears on the jerseys of the teams and all sports leagues have similar financially lucrative deals. For them to be pulling in money hand over fist and deny individual players the same right when it comes to a tattoo strikes this Libertarian as grossly biased although certainly legal. The players have all sorts of their own apparel contracts in which they support various companies and are financially remunerated for doing so. Why shouldn’t this apply their own body, the mostly uniquely individual and privately-owned thing of all?

My third issue is that the NBA has allowed several players with tattoos to play without fines for the last few years. This means they are engaged in selective enforcement of their rules. I’m not sure if it has to do with the fact the tattoo is of an apparel company as opposed to a television show but one has one’s suspicions.

In the end, the league is free to make their own rules and that’s a good thing. I just wish people and organizations would realize the freedom they enjoy to do as they please should extend to everyone else as well. JR Smith’s freedom is my freedom.