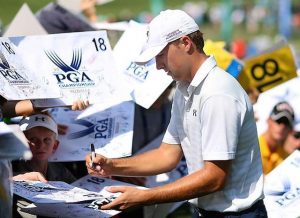 There was an interesting story from the United States Golf Open this morning that I think gives us a fairly keen insight into the nature of capitalism, both good and bad.

A professional golfer by the name of Jordan Spieth refused to sign autographs for two adults while signing for a child who was being “smooshed” by said adults. Spieth determined, and I absolutely believe he was correct, that the adults were what are called Professional Autograph Seekers. Such people collect autographs for resale at such outlets as eBay.

This practice has angered quite a number of celebrities from politicians to athletes to actors and beyond. Many of them have instituted policies to try and ensure their autographs only go to those who want them as a souvenir rather than as a money generator.

There are several thoughts behind this line of thinking.

One of the main arguments is that the celebrities can and do make a great deal of money by selling their own signature. That professionals are simply stealing profits that are legitimately the celebrity’s.

Another is that time spent signing for professionals takes away from available time to sign for legitimate fans who want a personal souvenir.

Both reasons are legitimate and I certainly don’t have a problem with Spieth, or any other celebrity, who tries to limit their signature when it comes to professionals.

But now I’ll come to the point of today’s blog. The economic reality is that there is a ready-market of people willing to pay fairly significant sums for those signatures. Where there is a market there will be suppliers. Suppliers will find a way to meet demand. Professional Autograph Seekers pay children to collect signatures. They seek autographs through the mail. There really isn’t much a celebrity can do except stop signing altogether. That, of course, deprives those who want a souvenir both at live events and at auction sites.

It’s a situation that brings to light the full gamut of capitalism. Good and bad.

The selling of signatures makes money for the celebrity and the Professional Autograph Seeker. It means that many people who want a signature as a souvenir get it despite never being in close proximity to the celebrity. Those are both good things.

It also means that the amateur is often pushed out of the way. That a child who wants an autograph is smooshed. Let’s not mince words. Celebrities don’t sit and sign until the last person is gone. They have limited time and every professional means one less signature for an actual fan.

There really is no villain here. Spieth wants to give his signature to people who value it for personal significance. Professional Autograph Seekers are simply making money from a ready market. Those buying on eBay or other outlets are spending their money freely knowing full well who is selling the autograph.

A politicians might try to outlaw selling signatures that are not your own and thus create a giant black-market with all the violence and fraud such illicit underground situations always bring.

The world ain’t always pretty and many times there just isn’t an equitable fix. Striving to find political fixes for things that cannot be fixed leads to bigger problems than the original issues. Don’t do it!

One thought on “Jordan Spieth and Professional Autograph Sellers”