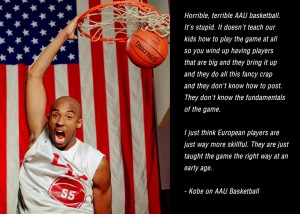 There is an interesting sports story making its way through the various news outlets and it brought something to my attention of which I was unaware. All-time NBA superstar Kobe Bryant recently made some comments about the way young U.S. basketball players are being coached and prepared for the future. He didn’t pull any punches. He also talked about treating the young players like “cash cows”.

He suggested that the Amateur Athletic Union’s (AAU) Basketball arm was largely encouraging young players to perform highlight reel plays rather than learn fundamental basketball skills. That this leads to a lack of basic skills in players all the way up the chain to the NBA. When Kobe talks about the AAU he is also speaking of some leagues you have likely never heard of called EYBL, Adidas Uprising, and the UAA. He lamented that players coming from Europe have better team skills than young U.S. players and this was going to have a long term negative effect.

What I want to talk about today is his “cash cow” comment. It ties back to what he was saying about the lack of fundamental skill but also goes very strongly towards my Libertarian ideology. You have to understand what is EYBL, Adidas Uprising, the UAA, and the new model of the AAU based upon the existence of these other leagues.

Let’s jump back into our time machine to examine youth sports fifty years ago. There was little in the way of traveling teams and the vast majority of players learned their skills from local coaches with a few making select AAU teams. That world no longer exists. EYBL is a Nike organized youth league. Uprising is Adidas and UAA is Under Armour. The main purpose of these leagues is to make money, not develop overall player skills. These corporate leagues do focus on highlight reel plays although there are certainly good coaches in their ranks who work on fundamentals. The players in the leagues travel all over the country to sold-out stadiums to play in All-Star games and one regional “Championship” after the next. The parents of these players shell out big bucks to play in the league. These leagues quickly sucked up all the talented players leaving the AAU to follow the business model or die.

Agents associate themselves with the brightest young talents and their parents. Corporate sponsors make friends with the players who will journey on to college and potentially the NBA with an eye towards the bottom line for Nike, Adidas, and Under Armour. They are, for all practical purposes, professional development leagues making money and channeling players towards their agency and products.

What Kobe Bryant says is absolutely true. The players are focusing on big plays to the detriment of their fundamental skills and corporate sponsorship is making big bucks while the players provide the entertainment. Certainly the top level players are gaining keen competitive advantages by playing against the most talented young athletes from other parts of the country that they would never otherwise have competed against. This does serve them well when they transition to high school, college, and potentially NBA careers. So they are profiting to some degree.

Is this corporate takeover of youth athletics a bad thing? A good thing? I think there are arguments to be made both ways.

People are paying to see these young athletes play. Parents are willingly forking over big chunks of cash to allow their children to play even if their dreams of eventual professional stardom and return for their investments are unlikely to be realized. The kids are traveling the country playing a sport they love.

On the other hand the kids are being used to generate large sums of money while getting very little, and no actual payment, in return. This runs counter to my capitalistic ideology. Those who do the work should be getting a share of their profits, as do those who run the league. Parents are being manipulated by promises of eventual college scholarships and huge paydays in the professional leagues. Only a small percentage of these promises are met.

We see this same corporate takeover with Marching Bands, Cheer Competitions, and a variety of other youth pastimes. Things that used to be for kids are now for adults and focus largely on profits. Various companies create artificial “championships” in which parents pay for uniforms, travel, tickets, and sundry other items which all generate profit for the corporations.

I’m not against making money. I think if kids want to participate in these leagues, if parents want to shell out money to have their kids play, and if spectators want to watch then that’s fine.

What Kobe doesn’t like and where I agree with him is that the kids seem to be getting the least from all of it. I don’t think corporate leagues are going away simply because of the profit involved. I do think the kids doing the work should be compensated just as you are paid for working at your job. The kids doing the work should be treated as employees, not cash cows. They should be paid either directly or in some deferred manner. After all, we are not communists.